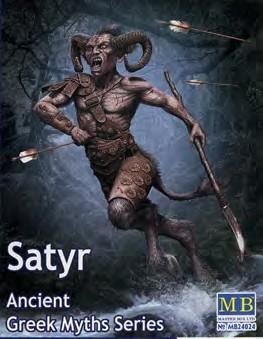 Master Box has launched several new figure lines, and its Ancient Greek Myths series is a boon for fantasy modellers, notably via this Satyr. Arguably, it’s based more on the Roman version than the Greek (with a goat’s hind legs and horns), but the quality of the parts is stunning nonetheless. There are 14 parts in total, and the facial expression is superb, as is the muscle tone on the upper body and fur texture on the legs. It’s posed as if charging a bow-armed opponent and is pulling an arrow from its abdomen with one hand, while wielding a double-bladed spear in the other (although not in keeping with the satyr’s hedonistic origins, it is rather dramatic). There’s a moulded pin on the right hoof to attach it to a base, although none is supplied in this boxing.

This three-figure package from ICM replicates the immediate aftermath of a fire, with one of two soot-stained firefighters letting a small boy try on his helmet. All are depicted standing, with the second firefighter carrying an axe over his shoulder. There’s just a single runner, and while the boy has separate limbs, torso and head, the torso is in halves for the larger figures as these incorporate a jacket/overcoat. The latter are the undisputed highlight, with fine renditions of the fastening toggles. These subjects are designed to be posed with ICM’s exquisite Model T 1914 Firetruck (see Reviews, May 2017). 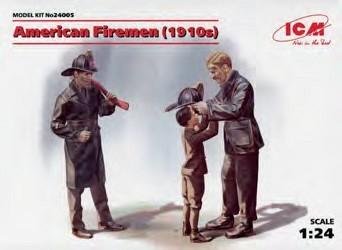 Man in a bowler hat

Web: www.toro-model.com.pl Cast in resin as part of Toro’s The Thirties Varsovians (residents of Warsaw) range, this well-heeled chap would look good in any diorama/vignette. Bedecked in a two-piece suit, collar and tie, and with a bowler hat, this fellow has a confident stride, cane and briefcase in hand. Neat touches include the pocket square, buttonhole detail and wide trousers with turn-ups. The facial features are strong, with a moustache present, and the case and walking cane are cast integrally with the hands. Realistically, the figure could be used in various urban European wartime scenarios 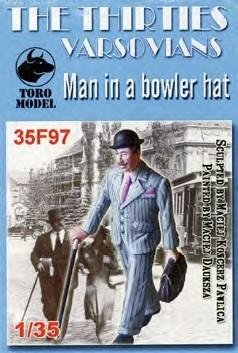 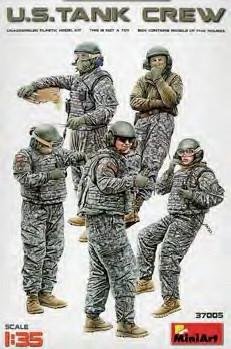 Web: www.creativemodels.co.uk For all the recent flurry of 1/35 M1 Abrams kits, there’s an absence of crew figuresàbut MiniArt has filled the gap in style. The parts are well moulded and while flash is present on most, it should be easy to remove. Clothing and equipment detail is superb, notably the body armour, which is the latest Improved Outer Tactical Vest (IOTV). There are five multi-part figures, each on its own runner, offering a full complement of commander, gunner, loader and driver, three of which are wearing tactical googles and IOTV (the driver wears an Olive Drab short jacket), with an extra standing individual sporting body armour, helmet and ballistic protection sunglasses.

Web: www.royalmodel.com If employed on its own, or with other items, this unusual set oozes character. The donkey is posed in obstinate mood, settled for what could be a long period of “no, I’m not doing it!” Said beast is mastered and cast beautifully, with integral harness, bridle, saddle and pole-holder detail. The buggy is splendid, too, and has delicate wood grain on the cart attachments and panels, and filigree decoration for the rear of the buggy comes via photoetched brass. Faint flash marred the wheels on our sample, but it’s removed easily. Meanwhile, the soldier figure stands hands on hips, almost resigned to the animal’s disobedience; the former’s uniform and facial features are splendid, and will repay careful painting and shading. Superb! 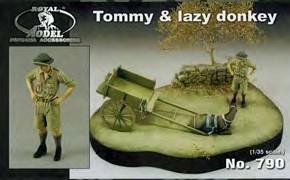 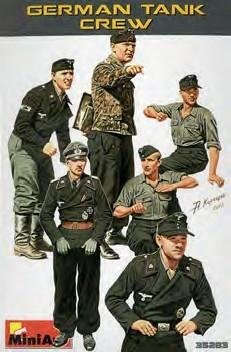 With the huge number of German armour kits available, appropriate crew figure sets are useful. MiniArt’s package offers six tankers in varying uniform. There’s a selection of early pattern black Feldjacke tunics and Feldmütze caps, Panzer trousers with ankle drawstrings, ankle- and knee-high boots, peaked Einheitsfeldmütze headgear and ‘mouse’ grey shirts. The anomaly is the buttoned jacket (shown in Pea camouflage), which is different from the usual SS smock, so it could possibly emulate a bespoke garment. Uniform details are good, but there’s a mould line down each visage, and the facial features don’t compete with MiniArt’s earlier offerings.