As CHRIS CLIFFORD reports, the Czech company has re-released its 1/48 Breda Ba.65 with new decals. 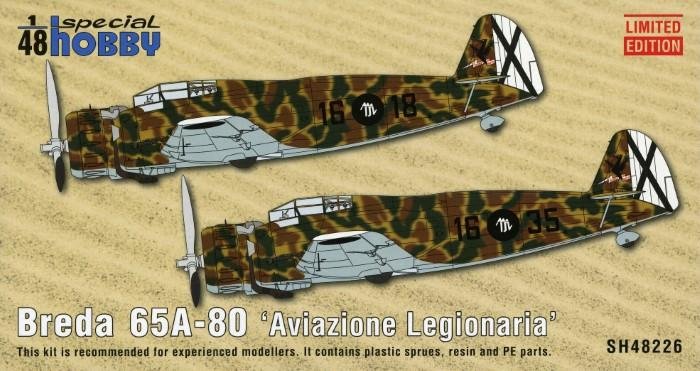 Breda’s Ba.65 was flown in combat during the Spanish Civil War, and in the early years of World War Two. In the latter, it served almost exclusively in North Africa and the Middle East. This single-seat, all-metal monoplane replaced its predecessor the Ba.64, and was expected to perform fighter, attack and reconnaissance duties. It took a heavy toll on British armoured forces out in the desert, but was vulnerable when faced by Allied fighter aircraft.

So far, Special Hobby is the only manufacturer to release the type as a styrene product in 1/48 scale. Since the initial launch in 2010 (with Italian Air Force markings), it was reworked as an Iraqi Air Force machine with a fuselage gun turret, two years later. Now, it returns in a limited-edition package (kit SH48226) as the single-seat Ba.65A-80, with markings for Italian machines flying in support of Fascist militia in the Spanish Civil War.