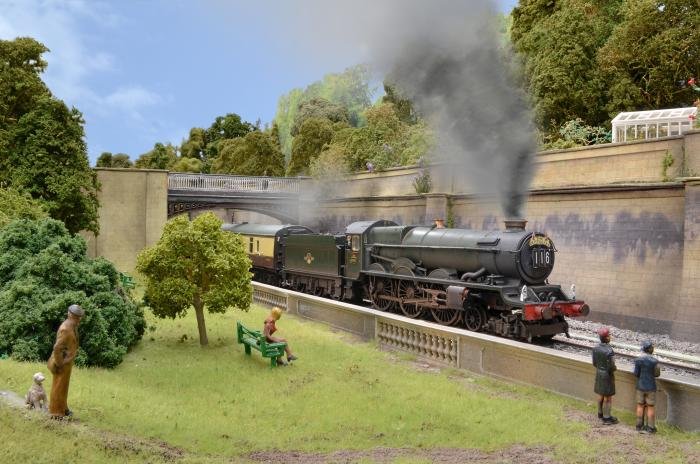 Sydney Gardens is a faithful representation of the stretch of the Great Western Railway main line on the approaches to Bath. Built by a group of like-minded modeller’s who live locally to the area, the layout aims to be the stage for prototypical trains which ran on the BR Western Region during the late 1950s and early 1960s, a time when steam traction was giving way to diesel.

The layout features 3D printed stone balustrades together with card built retaining walls, bridges and buildings using scalescenes papers. The layout is populated by Modelu 3D printed figures with images on the back scene photographed in the real location, which was designed by Brunel specifically to blend in to the existing Georgian architecture of the city.

Take a while to enjoy the gardens and a spot of train spotting as many have done over the years – Look out for the 'Bristolian' and 'Merchant Venturer' named expresses hauled by GWR 'King' class 4-6-0s and other famous express locomotives. Steam is also joined by the famous Western Region diesel hydraulics including 'Westerns', 'Warships' and 'Hymeks' which are seen on a variety of workings including passenger, general goods and cement. Everything has been weathered appropriately with steam locomotives receiving a crew, appropriate lamp codes and a real coal load.

The expansive storage yard at the rear provides a steady stream of trains in both directions with potential for a total of 24 trains.

Read the full feature on Sydney Gardens from HM102 here.