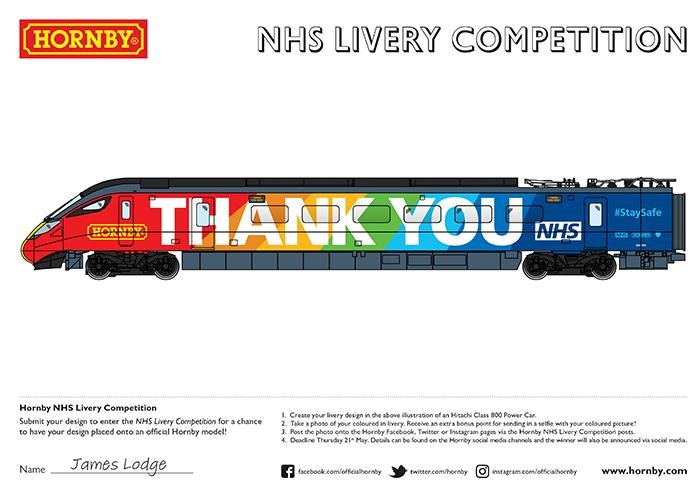 The original artwork created by James Lodge for the Hornby NHS livery competition.

THIS year’s COVID-19 pandemic saw the National Health Service’s (NHS) staff tested like never before, and to show their support and raise funds for the life-saving organisation Hornby launched a competition in May (HM156) to design a livery to be applied to a Class 800 power car. The prize for the winning entry was the chance to have the livery applied to a unique limited edition of just two models. The second was raffled through a charity drive via Just Giving orchestrated by Hornby.

In total £4,494 was raised through the livery artwork competition and Just Giving page for the NHS. The winning livery design was created by James Lodge and selected by Hornby Magazine Editor Mike Wild from a huge selection of more than 500 entries (HM158). Mike commented: “It was a tough choice and a close run competition with so many brilliant entries, but James Lodge caught our eye with his creative scheme combining the rainbow colours, thank you message, NHS logo and StaySafe message. A great design which looks super on the Class 800 body shell.”

The finished model is a standard motorised Class 800 power car which has been overlaid with a vinyl of James’ design. The finished result is a striking driving car which matches the original artwork created for the competition. Like all of Hornby’s Class 800 power cars, it features a five-pole motor, all-wheel drive, an 8-pin decoder socket, directional lighting and space for a 40mm x 20mm speaker space.

To make the NHS liveried Class 800 an official Hornby product it has been given an ‘R’ number, bespoke packaging and a limited edition certificate.

To make the model official it has had exclusive packaging created in Hornby style as well as being given an official ‘R’ number – R30072. A limited edition certificate has been issued with each of the two versions making this one of Hornby’s most exclusive models in its 100 year history. 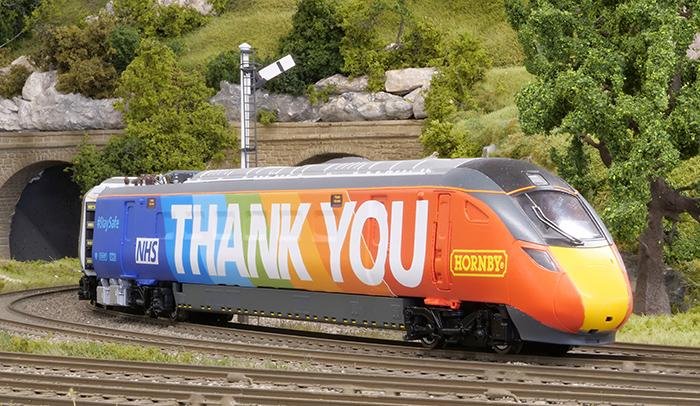