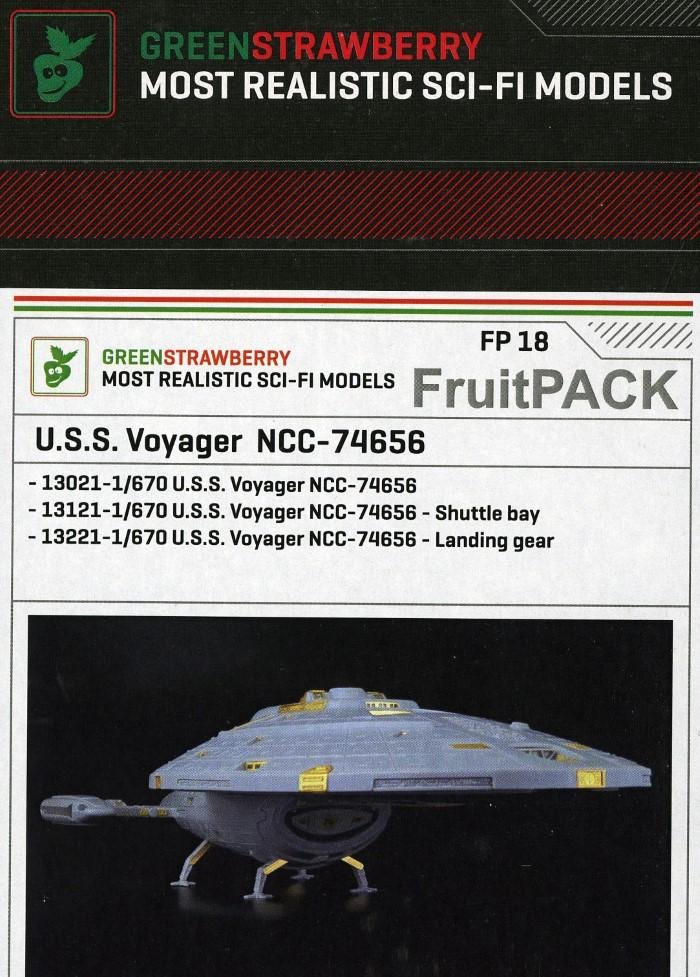 Television show Star Trek: Voyager first aired in 1995 and ran for six years. It was centred around the USS Voyager NCC-74656 commanded by Capt Kathryn Janeway, and won a loyal following. Its popularity wasn’t lost on kit company Revell which, having a long history of moulding Star Trek subjects, duly produced kit 04992 in 1995… a 1/670 scale replica that’s been re-released several times, the last being in 2019. 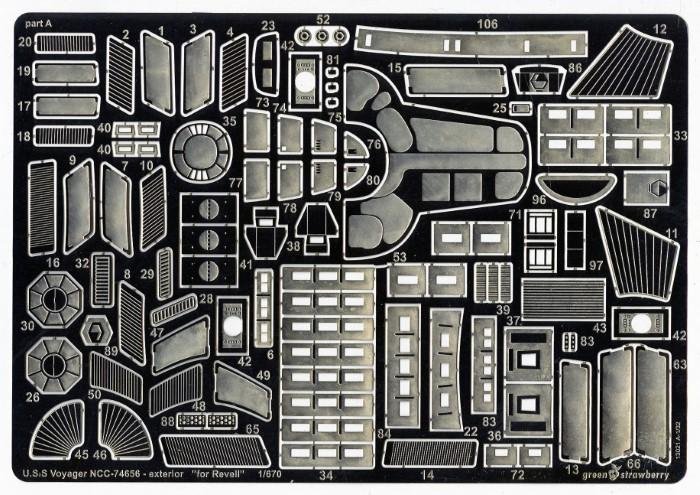 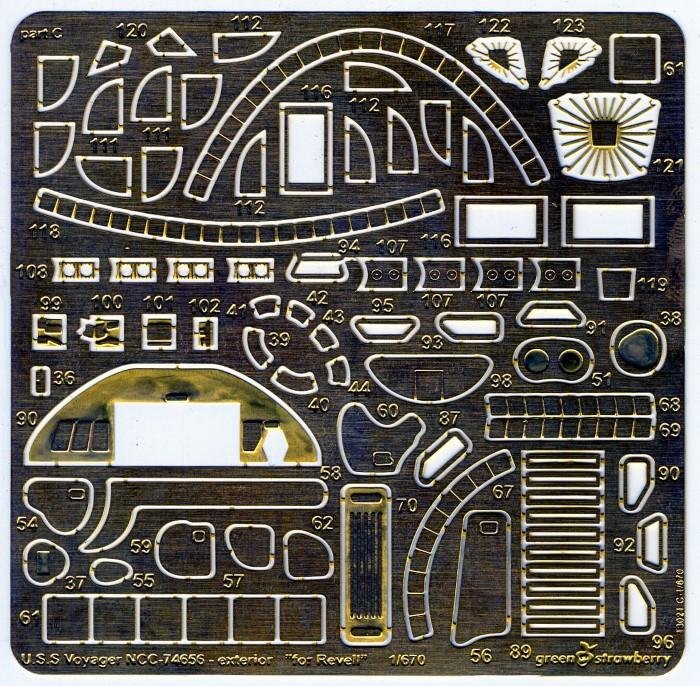 13021 USS Voyager NCC-74656 Individual price US $49.49
This is a comprehensive package featuring three differently sized PE frets, the metal being rather thick and sturdy on the brass fret, while the others are thinner and more flexible. There are many features, such as window frames (some of which can be backed by the provided paper-printed views of the rooms inside), surface panels, grilles, interior structures and more. 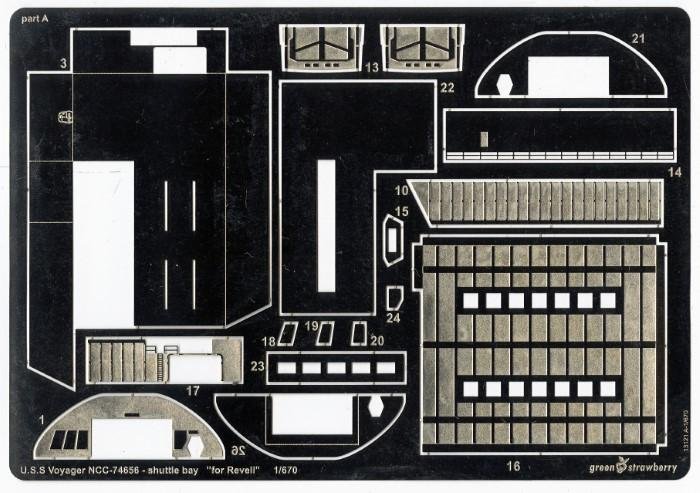 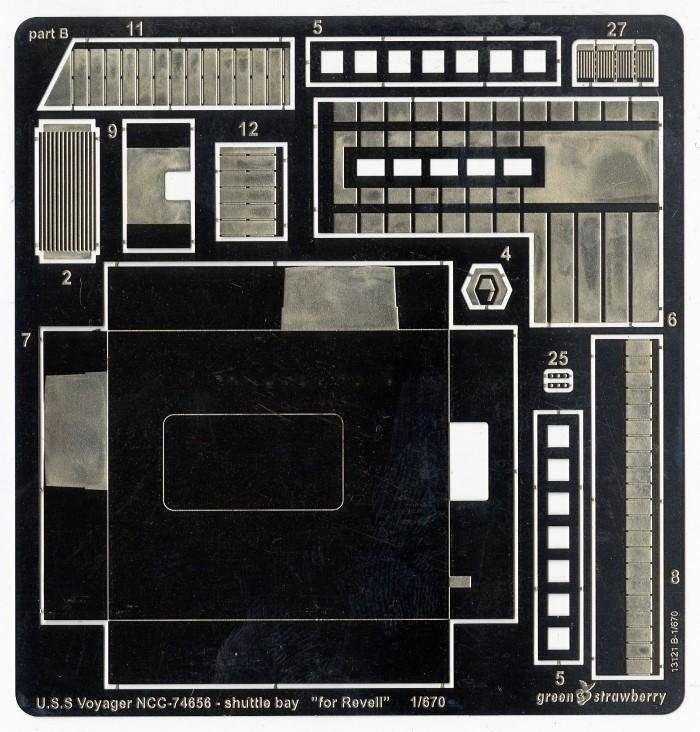 13121 USS Voyager NCC-74656 - Shuttle Bay individual price US $38.02
Here, quite large PE components are folded and combined with smaller details to form Voyager’s Shuttle Bay. Recesses on many parts held by the two relatively thin frets produce an appreciable sense of depth, and there are very fine grille/railing sections. The whole sub-assembly fits to a large-ish kit part, which needs surgery before the bay is attached to it. 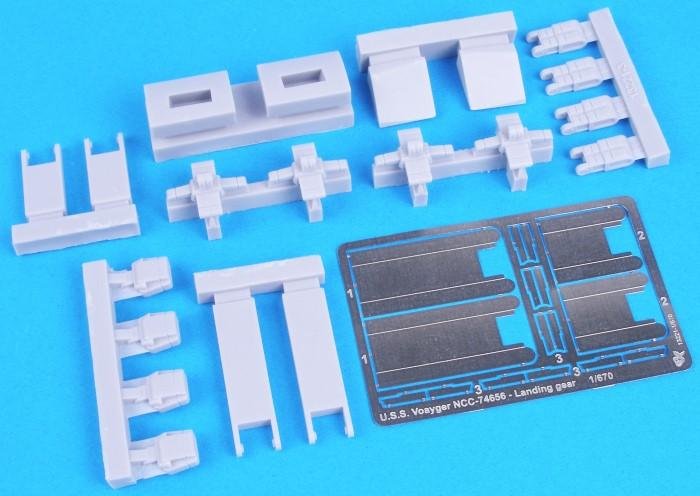 13221 USS Voyager NCC-74656 - Landing Gear individual price US $41.63
Twenty crisply cast and well-detailed resin components are accompanied by 16 PE pieces to reproduce the landing gear in a more refined manner. Just four small sections of kit styrene must be removed, but the rest looks like plain sailing – basic folding and separating the resin parts from their casting blocks, and the requisite assembly.

Serious science-fiction modellers relish the opportunity to add so much detail to a spacecraft such as this, and the quality is first rate. Granted, the outlay isn’t cheap but if your budget allows, a much busier and convincing replica will be the result.

The sets are available direct from www.greenstrawberry.cz