A trio of liveries for the mighty A-10 ‘tankbuster’ has been released by the US-based decal designer. 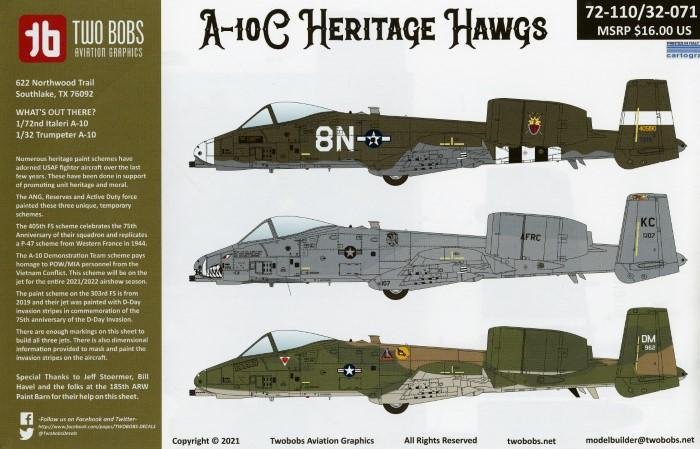 Two Bobs is renowned for its decals that mainly cater for US aircraft (although it does occasionally venture out of this speciality). Having already issued various sheets for the A-10, nicknamed ‘Hawg’ by those who fly and maintain it, Two Bobs now offers three new special schemes in the three major scales. 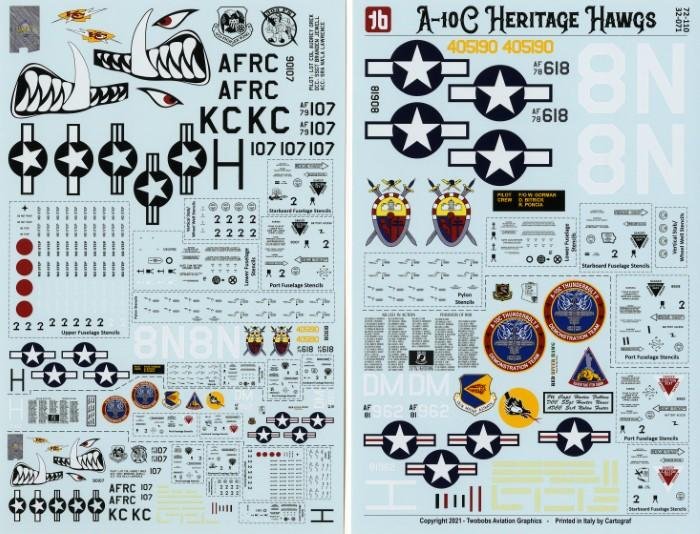 •    A-10C 78-0618, 190th Fighter Squadron, Idaho Air National Guard, May 2021. This jet is painted in Olive Drab and Neutral Gray, to mark the unit’s 75th anniversary. The colours and ‘8N’ fuselage codes were worn by the squadron’s P-47 Thunderbolts while operating in western France in 1944. Invasion stripes are painted under the wings and lower fuselage between the engine nacelles
•    A-10C 79-0107/KC, 303rd Fighter Squadron, 442nd Operations group, Whiteman AFB, Missouri, December 2019. While the aircraft wears its standard low-visibility grey scheme, it received invasion stripes ‘above and below’ to mark the 75th anniversary of the D-Day invasion
•    A-10C, 81-0962/DM, A-10 Demonstration Team, Davis Monthan-Tucson AFB, Arizona, April 2021. This machine is resplendent in the traditional Southeast Asia livery worn by aircraft such as the F-4, A-7 and F-105 during the Vietnam War. The jet pays homage to US personnel listed as POW/MIA from that conflict