NO SOONER had modellers readied themselves for a 1/72 Wellington, than AlleyCat Models announces an all-resin Vickers Warwick in the same scale.

Three boxings are planned; there are Airborne Search and Rescue variants, which include two styles of under fuselage lifeboat and offer standard three-tone camouflage and post war overall silver. The GR.II/V supplies markings for RAF, Royal Canadian AF and South African AF airframes (all in white with Medium Sea Grey uppersides), while the transport C.I/III provides South East Asia Command and civilian (BOAC) colour schemes, and the sub-type’s characteristic pannier-style cargo bay. The detail incorporated is superb, notably on the powerplants, and there will be Bristol Centaurus and Pratt and Whitney R-2800 Double Wasp (with Hamilton Standard props)-powered options.

Perhaps the standout feature has to be the wings, with the geodetic structure replicated accurately; notably the fine diamond ‘waffle’ pattern, while the main fuselage has fluting, replicating the doped fabric over wooden batons, although it appears slightly heavy in places.

There are three cut-outs on each fuselage side for windows/blanks, and these will vary depending upon which version is built. For the armed ASR versions, there are three well-appointed turrets, with clear resin glazing, twin- and quadmachine gun mounts (the latter for the rear unit), while blanks serve for those spaces on the unarmed transport. More news on this and other releases is available at: www.alleycatmodels.co.uk 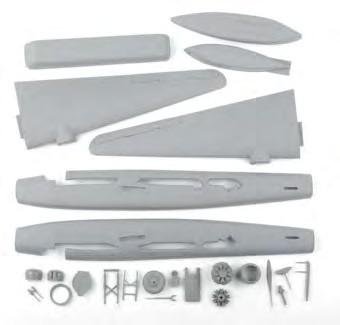