Air Graphic’s second batch of search and rescue helicopter schemes concentrates on two types operated by the US Coast Guard – the MH-68A Stingray (based on the Augusta A-109) and HH-65 Dolphin (Eurocopter/Airbus Helicopters AS365) – and offers 24 schemes. 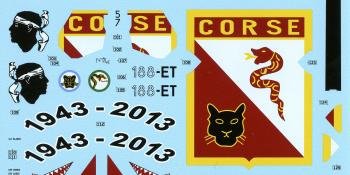 Fans of Mirage 2000s and anniversary schemes are in for a real treat thanks to this sheet from Syhart, which provides decals for two specially marked aircraft.

Suitable for any 1/144 kit of the type, Decales Global’s markings supply the livery for Trans World Airlines (TWA) Boeing 727-100s with small logos behind the fore entry door.

Modellers with Revell’s 1/24 Ford GT Le Mans racing car can apply an alternative livery with these Decalpool markings – that of the #67 car raced at the Circuit de la Sarthe in 2019. 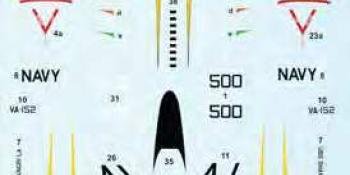 While later A-4s from VA-152 (nicknamed variously as Friendlies, Mavericks and Fighting Aces) are served poorly by kit manufacturers – just Fujimi’s 1/72 A-4B has markings for this squadron – there’s a thriving aftermarket scene, such as this example from MILSPEC for an A-4E assigned to the USS Shangri-La during the unit’s last operational cruise from March-December 1970. 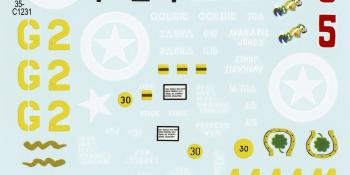 Released to coincide with the 75th anniversary of the D-Day landings, this sheet is focused on the 75mm main gun-equipped M4A1 Sherman, including snorkel-fitted and Duplex Drive ‘Donald Duck’ variants. 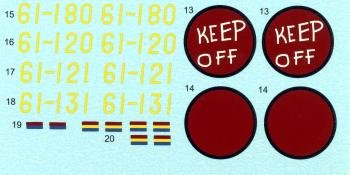 H-Models’ 1/48 Mitsubishi A6M5 Zero Model 52 decals are perhaps named somewhat misleadingly, as the set provides for a quartet of airframes captured on the ground at Saipan. 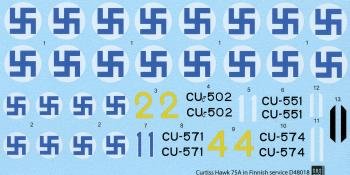 Options for Curtiss P-36 Hawk liveries in 1/48 aren’t plentiful, so its great to see aftermarket supplier SBS step forward with these Finnish-operated Hawk 75A schemes. 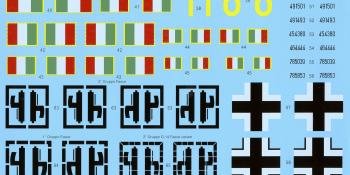 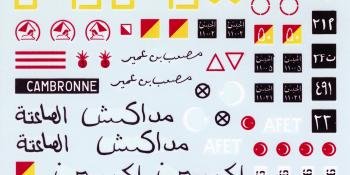 This evocatively titled Star Decals set provides for a varied array of M47 Patton tank liveries, suitable for kits by Italeri, Revell, Tamiya and Takom, among others. 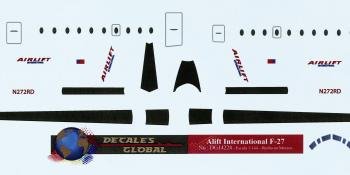 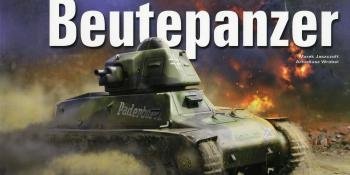 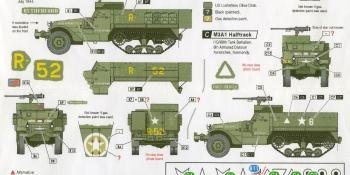 If you plan to build a US Army M3A1 half-track but want alternative markings, check out Star Decals' sheet 35-C-1233, which offers four fresh liveries. 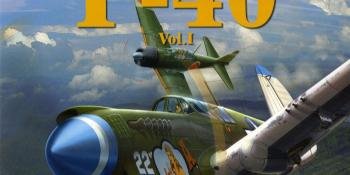 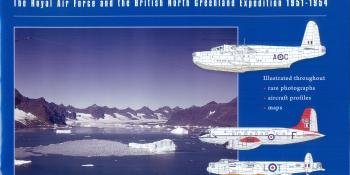 With the re-release of Special Hobby's 1/72 Short Sunderland Mk.V, this book and decal combo from Linden Hill can provide a very different perspective on your build project. 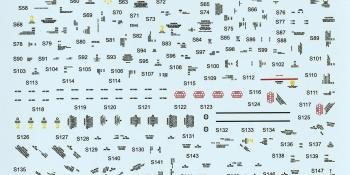 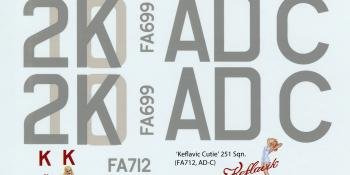 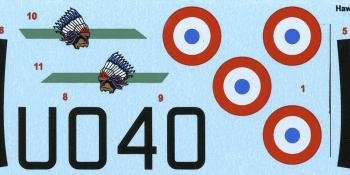 Perfect for early-model P-36 kits in 1/72 – such as those by AML, AZ, Aoshima, Monogram and Heller – these LPS Hobby markings cater for an early-war French airframe and a Brazilian aircraft later in World War Two. 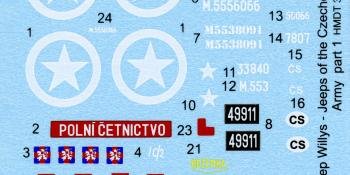 Modellers seeking a slightly different appearance for their 1/35 Willys Jeeps may wish to consider H-Models’ limited-edition Czechoslovakian decals, which provide for four vehicles - read a full review of these markings here. 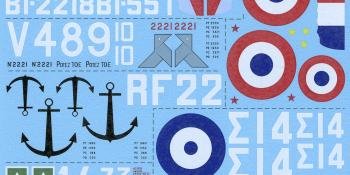 Intended for its own Potez 25 kits, Azur-FRROM’s decals provide for a wealth of airframes - including those used by famed 20th century aviators, as AMW's review reveals... 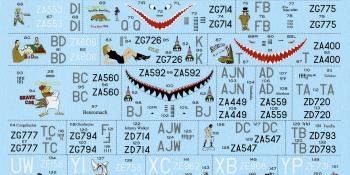 This bumper offering from Air-Graphics includes two A5-sized decal sheets and supplies sufficient markings for more than 50 RAF airframes either involved or placed on standby for Operation Telic during 2003. Check out the full selection and the sheets themselves in this full-length review. 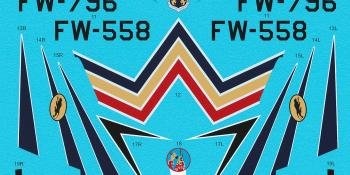 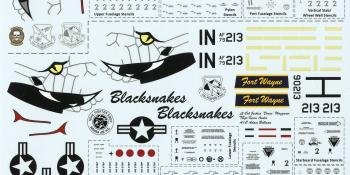 Modellers seeking different schemes for their Hobby Boss, Monogram and Italeri kits (although not straight from the box – they all need ‘tweaks’) or the forthcoming Academy offering will find much to savour on this set from Two Bobs. 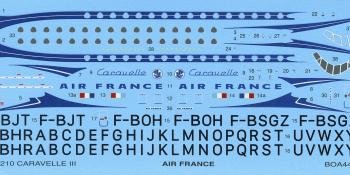 Designed to fit the Airfix or AModel Caravelle III kits, this comprehensive two-sheet set from BOA enables modellers to build any of the 46 airframes operated by Air France. 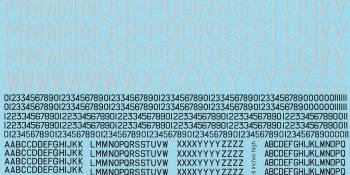 Kits-World has produced this set of late-1930s-style airframe letters for RAF aircraft in 1/72, replicating the Stores Ref. 33B/157 specification of 24in squadron/airframe letters in Sea Grey (later renamed Sky Grey). 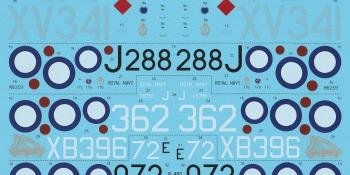 The Audacious-class aircraft carrier HMS Eagle is the subject of On Target’s decals – in the form of the piston and jet-powered machinery carried by the craft. 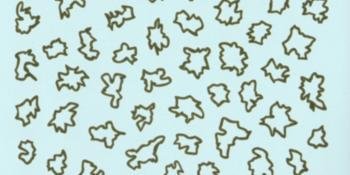 Designed specifically for quarter-scale Macchi MC.202 Folgore and MC.205 Veltro kits – the former of which the firm has included in its range – are Eduard’s ‘smoke ring’ decals, replicating the unusual camouflage favoured by Italy. 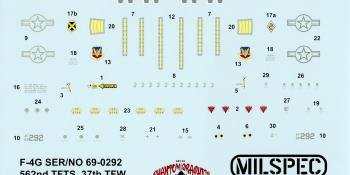 While the operational F-4G ‘Wild Weasel’ airframes get most attention, this superb decal sheet from MILSPEC provides markings for a training unit machine, assigned to the 562nd Tactical Fighter Training Squadron, 37th Tactical Fighter Wing at George Air Force Base, California, in 1990. 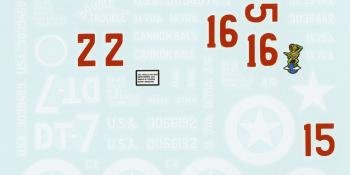 Here’s another great compilation of schemes from Star Decals, with this sheet focusing on the vehicles used by the US Army’s 70th Tank Battalion ‘Thunderbolts’ at Utah Beach on June 6, 1944. 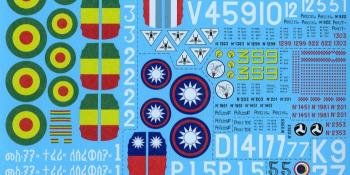 French manufacturer FRROM has released a stunning set of aftermarket decals with its own 1/72 Potez 25 kit in mind. Operators include Ethiopia, Manchura and Indochina...how's that for exotic biplanes!