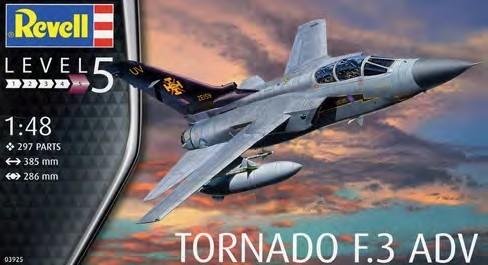 GERMANY’S REVELL will please many a Panavia Tornado enthusiast with its new 1/48 F.3 ADV.

Essentially a re-working of ithe firm’s same-scale IDS/ GR.4, kit 03925 supplies the obvious differences, such as the re-shaped nose and underside panel with recesses for Skyflash missiles. All the other choice features from the ground-attack variant are here…fine panel lines, separate flaps and leadingedge slats, engine trunking, pleasing cockpit and exhaust detail, and swinging wings. Two RAF colour schemes are provided, those being for ZE809, the 23 Squadron 75th anniversary jet from 1990, and 111 Squadron’s black-tailed 85th anniversary machine, ZE159, from 2002.

Minor errors/omissions have occurred, and while this often happens with releases from other manufacturers too, it could be prevented with better research. While two sizes of fuel tank, Skyflash missiles and a BOZ countermeasures pod are included, the AIM-9 Sidewinders have no rollerons and the front fins are incorrect – yet Revell gets the latter right on its box art.

Besides this, AN/ALE-40 chaff/flare dispensers are moulded in situ on the underside, but as these were not fitted until the First Gulf War in 1991, they will have to be hacked off the underside if building the 23 Squadron airframe. No BOL rails, AMRAAM or ASRAAM missiles feature here, for later-service builds, so we can only hope these may appear in a future boxing…perhaps also with Italian and Saudi markings options? That said, we should be thankful for a reasonably priced F.3 that’s accurate in outline. Visit: www.revell.de/en for more details.