Beginning more than 60 years ago, this fascinating club has built a complex network of ‘O’ gauge and ‘SM32’ outdoor railways in woodland near the Midland Main Line, as JIM RAYNER reveals. Photography, Trevor Jones. 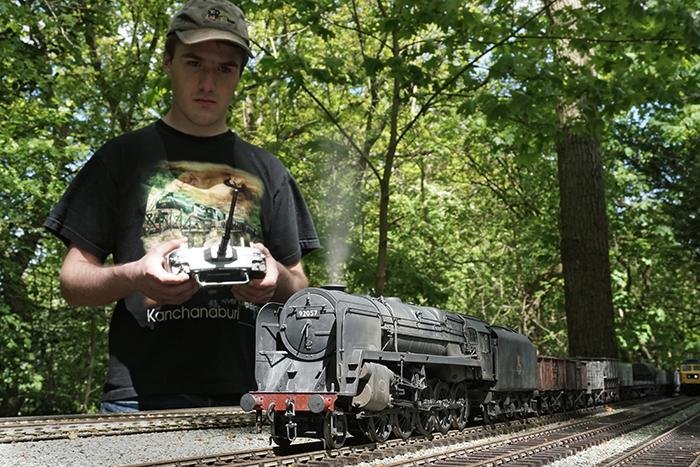 Above: The finely weathered kit built BR ‘9F’ 2-10-0 pulls away from Newton with a train of coal wagons. Radio control equipment and batteries are housed in the tender to allow the locomotive to be controlled around the full railway.

Brambleton Model Railway Club is located in Harpenden, Hertfordshire. It can trace its history back to the late 1940s but was officially formed on January 1 1956 by a group of local schoolboys looking for somewhere to run their clockwork trains. Not content with running on the living room carpet, they set about finding a suitable outdoor location where they could create a sizable railway.

A site was soon found, and track laying commenced. Running mainly Hornby clockwork trains naturally meant ‘O’ gauge was adopted. In those days, track was not mass produced like it is today and had to be hand built. It was a time-consuming business, rewarded with some quite intricate crossings and pointwork, produced mainly by boys not much older than 12 years old. Running sessions were popular and the membership grew. The track didn't stay down long as a move to a new site was forced upon the club. Rebuilding started at a new location, but again this proved to be temporary as the land was needed for a housing development.

The club finally settled into its present location in the early 1960s, which is a triangular wood bordered by three railway cuttings, two of which are disused with the third being the busy Midland Main Line. With plenty of space to utilise, ambitious track plans were drawn up. Eventually a design was agreed on and building commenced. It was a major engineering project for such a small and young workforce with tons of earth to shift, concrete to mix and brick walls to erect. The end result was one of the largest 'O' gauge outdoor model railways in the country. Everything was designed with ease of train operation in mind. The nine stations are strategically placed to be the right distance apart for the duration of a wound clockwork spring. The trackbed at stations is at waist height so there is no need to bend down and the main station is a brick built shed which the line passes through, allowing stock to be added or removed easily. 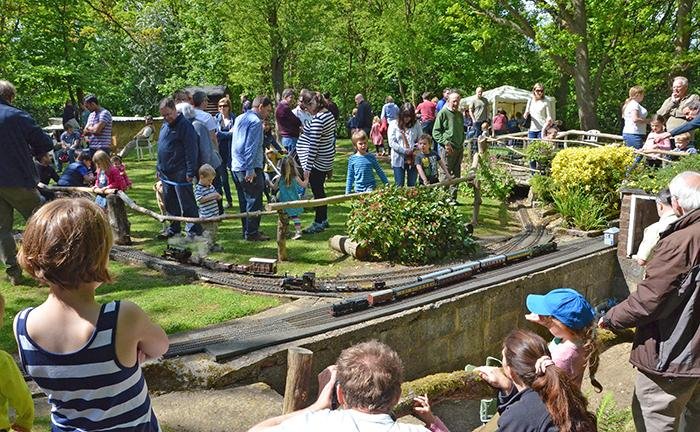 Above: Young and old watching the trains go by at Lympsham on Brambleton MRC’s ‘O’ gauge and ‘SM32’ live steam railways.

With such a large railway, some form of signalling was required, so each station was equipped with redundant British Rail block instruments allowing station operators to communicate with neighbouring stations using special bell codes to avoid collisions - in theory at least! Signalling courses were run by professional railwaymen to teach members how to operate the railway correctly culminating with an exam and presentation of a certificate for those that passed.

During the summer months, running sessions took place twice a week utilising the club’s large collection of clockwork locomotives and rolling stock from manufacturers like Hornby, Bassett-Lowke and Bing. There were even a few live steam meths fired Bowman engines that the older members could operate. The 1970s saw the introduction of the battery powered Tri-ang ‘Hymek’ diesel. Although designed primarily as a children’s toy, it was a very detailed representation of the locomotive and could be easily modified and painted to produce an acceptable model, so much so that they are still used today.

As time went by, the handmade track deteriorated and suffered vandal attacks making large sections unusable. The quickest and easiest way to replace it was with off-the-shelf Peco nickel silver flexible track. One of the drawbacks of this was that the flanges on the clockwork and tinplate stock were too deep to run smoothly on the new track. Some were rewheeled but most were put aside to be replaced by Tri-ang stock and the expanding range of British outline Lima models. 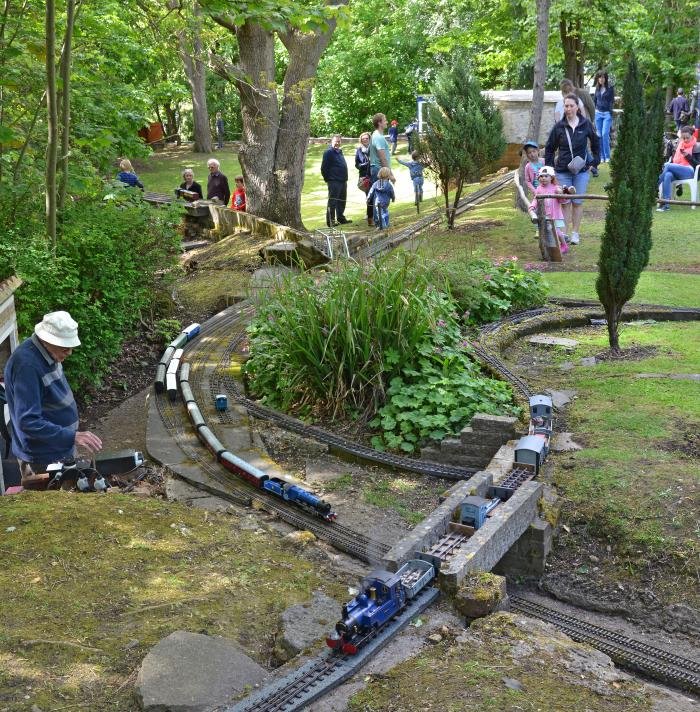 As Brambleton has no power supply, apart from car batteries to run the signalling block instruments, the Lima engines, mainly the ‘4F’ 0-6-0s and Class 33 diesels, needed to be converted to run on batteries rather than pick up through the rails. A forward/reverse switch is prominently located on the side of the engines making it easy for operators of all ages to control.

Heljan’s introduction to the ready-to-run ‘O’ gauge market has seen many of its products converted to battery-radio controlled operation by members. By using the latest 2.4GHz radio technology and sophisticated electronic speed controllers you can produce a locomotive that is extremely smooth, reliable and easy to control even when shunting. The track is pinned down onto recycled plastic boards which are screwed down onto a concrete base. The boards have a covering of roofing felt for cosmetic purposes.

The station areas have plywood boards, but these are gradually being replaced with the plastic type. Like the early days, all the pointwork is hand-built but now using copper-clad sleepers and Peco rail. They are all manually controlled and most have movable wing rails to accommodate coarse scale wheelsets. 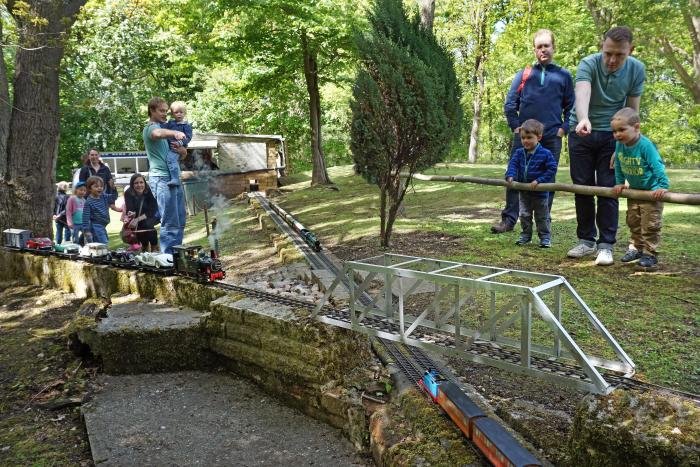 Above: Children’s favourite Thomas leaves Darlington heading towards Stockton. The motorail train sets out from Highfield on the ‘SM32’ line in the hands of a Welshpool and Llanfair Light Railway Beyer Peacock 0-6-0T.

The Mamod live steam locomotive proved irresistible to some members, although it was out of gauge with limited route availability on the original ‘O’ gauge network. It provided a welcome change from the whirring sound of an electric motor and produced the spectacle of real steam. The big drawback came with the type of fuel used to heat the water. The solid fuel tablets, although effective at boiling the water, tended to crumble and drop from beneath the locomotive onto the track. This intense heat would melt the sleepers and roofing felt, burning with an invisible flame which made it difficult to spot before the damage was done. Much to the disappointment of the Mamod owners, these types of locomotive were banned. The solution was to build a line suitable for live steam operation.

To accompany the ‘O’ gauge layout, the club now has an extensive network of ‘SM32’ - 16mm:1ft scale models running on 32mm gauge garden railway track. This was conceived by the head of the Permanent Way Department to alleviate the constant need to replace plastic sleepers that had been burnt on the main line sections. 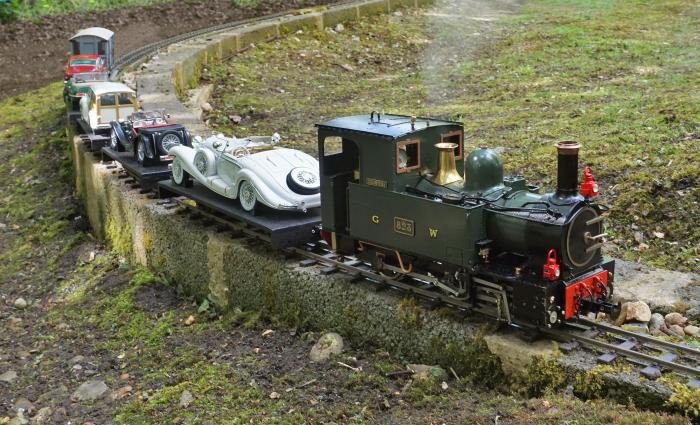 Above: An Accucraft Welshpool and Llanfair Light Railway 0-6-0T Countess heads the motorail train as it approaches Woodybark tunnel.

An interesting trackplan was devised incorporating bridges, tunnels and a spiral. The track to be used was the chunky, narrow gauge outline Peco ‘SM32’, which is ideally suited to use with live steam. This was agreed on by the club committee and as it was fast approaching the club’s 40th anniversary, the project was to be known as the Ruby Line. It was to be connected to the ‘O’ gauge line at two places, allowing standard gauge stock to run onto the new line too.

Work commenced in late 1995 with the route surveyed, cleared and marked with wooden stakes. These were driven into the ground at the correct height for the track base allowing for the differing gradients, the steepest being the spiral at 1-in-40. It was quite a challenge to build as the line had to twice pass under the main footpath into the site and twice cross over the ‘O’ gauge main line.

The line was completed in the summer of 1996 - much to the relief of the Mamod operators. It proved popular with Brambleton members and those of other organisations, so much so that the need to expand was soon talked about. Again, an ambitious track plan was devised with the result being the Millennium Line, built to mark that occasion. It can be operated separately or joined to the Ruby Line by an array of link lines creating a giant loop or figure of eight along with numerous other route possibilities. It offers 80 yards of level track with sweeping curves and a large junction station which doubles up as a covered steaming up area. 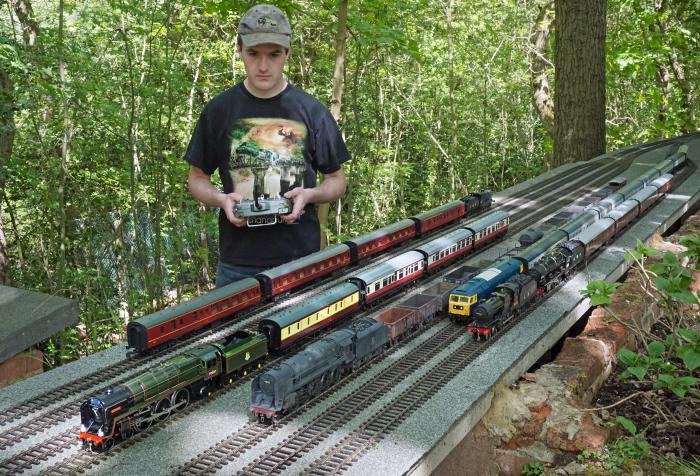 With the ever-increasing popularity of 16mm scale, this line too was soon running at capacity, so an extension was constructed in time for the club’s 60th anniversary. The new Jubilee Line adds another circuit complete with deep cuttings, a tunnel, two large bridges and a covered steaming up area. The method of construction for the ‘SM32’ line is to dig a trench about a foot wide following the route, being careful not to disturb the wooden stakes. The depth depends on the surrounding terrain: clearly if the line is to be level and the terrain rises, the trench will be deeper. The bottom of the trench is filled with about six inches of crushed hardcore then approximately five inches of concrete poured in.

Lightweight concrete blocks (215mm x 440mm) are then laid upright in a line and allowed to sink in the concrete until level with the nearby stake. The joints between blocks are filled with mortar after the concrete has dried. If the line rises more than the height of a block above ground level, shuttering is used to retain the concrete. If there is a significant curve, the blocks are cut to a suitable length before laying and canted slightly as they are being positioned in the concrete. The ‘SM32’ track is pinned directly onto the top surface of the blocks using 1in steel panel pins. The lightweight blocks readily accept small nails and hold them tight.

A typical running session on the ‘SM32’ line will see a variety of live steam locomotives from manufactures like Roundhouse and Accucraft along with home-built examples and even the occasional Mamod. The majority are radio controlled fuelled by gas, but the intricacies of coal firing is gaining in popularity. The simplicity of a diesel outline battery electric locomotive appeals to many and complement the live steam locomotives. The rolling stock can vary from a full rake of Ffestiniog bogie coaches to a few slate wagons. 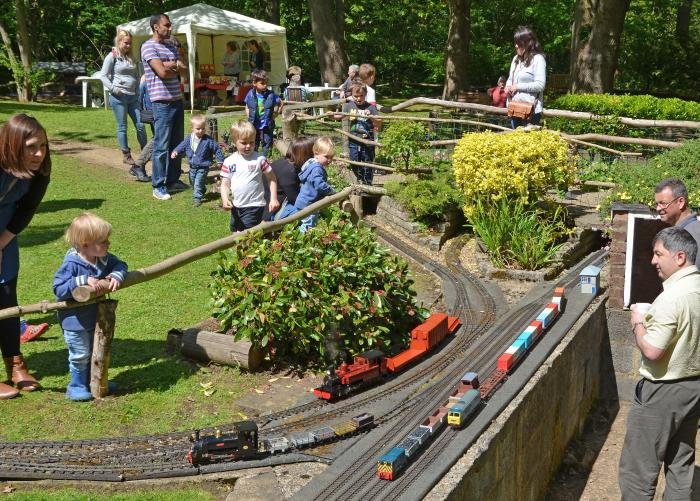 Above: At Lympsham the ‘O’ gauge and ‘SM32’ lines briefly run parallel allowing a comparison of scales. Although the track gauge is identical, there is a considerable difference in size of rolling stock – the ‘O’ gauge accommodating 7mm:1ft scale models while ‘SM32’ caters for 16mm:1ft scale.

Open to the public

The Club welcomes any individual or organisation who would like to use their facilities. It enjoys a close relationship with the West Herts Area Group of the 16mm Association which meets once a month at the layout throughout the year and assists with the club’s two annual public open days in May and September.

Generally, the ‘O’ gauge line is available for use from April until October with maintenance and upgrades taking place the rest of the year. The ‘SM32’ line is used regularly all year round, culminating in the popular New Year’s Eve steam-up. Visit www.brambleton.org.uk for more information about the club and its public open days. 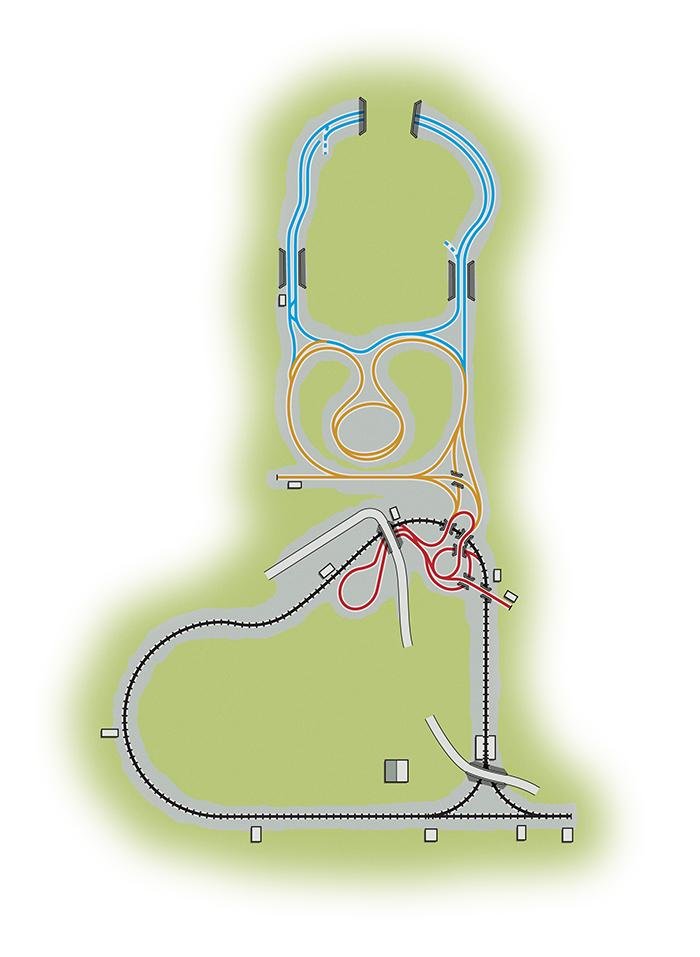 Above: Brambleton trackplan (Not to scale). 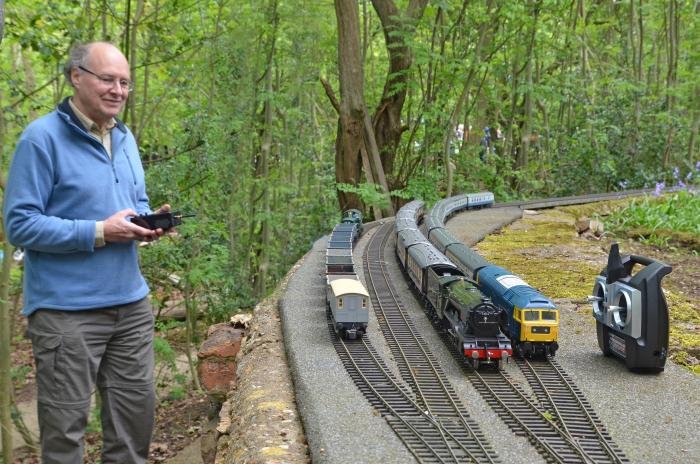 Above: Using a portable radio block instrument, the signalman at Bropeth North signals the ‘Tees-Tyne Pullman’ in the hands of a Gresley ‘A3’ 4-6-2 onto Newton. A freight train hauled by a Class 17 Clayton waits in the opposite loop while Class 47 is held in the passing loop for the next clear path to Newton.