Military modellers favouring 1/72 scale have a pleasing and versatile option in the Sd.Kfz.251 Ausf.C from Dragon, as CHRIS CLIFFORD reveals. 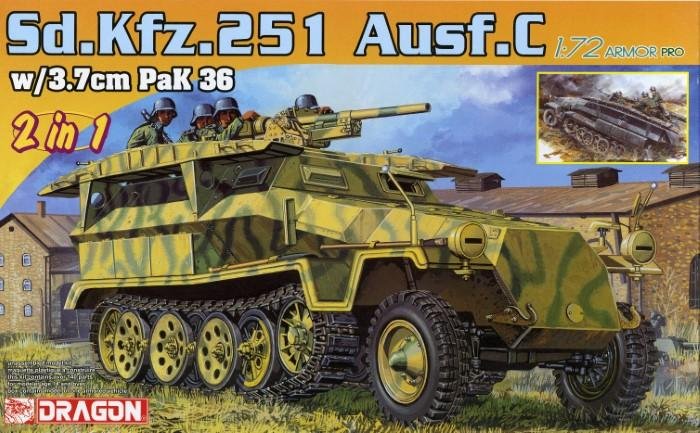 Half-tracks in any scale offer modellers the opportunity to have more detail visible at the end of their chosen project, due to their open-topped nature. You could be forgiven for thinking that 1/35 examples might possess more to attach and view. However, the series of Sd.Kfz.251 half-tracks by Dragon provides a wealth of features… mixing simplified construction on one hand, and a relatively high parts count on the other.

Kit 7606, the ‘2 in 1’ Sd.Kfz.251 Ausf.C w/3.7cm PaK 36, is a fine example of the family. But don’t be fooled… 2 in 1 does not mean two kits in one box. Basically, modellers receive alternative parts so they can build one of two different versions. Here, you can tackle either the ‘251/7 Pionierpanzerwagen, with two defensive MG 34 machine-guns and side-mounted bridge sections, or the ‘251/10, which also has the bridge kit but swaps the forward MG 34 for the so-called ‘door knocker’ 3.7cm gun.