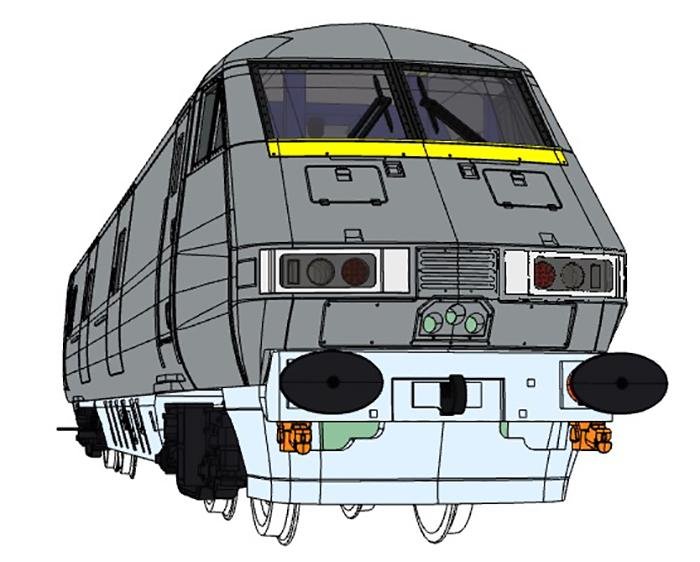 The first CAD drawings for Hornby's new 2021 range of BR Mk 4 carriages and matching Driving Van Trailers for 'OO' gauge have been released offering a first chance to see progress on these sought after vehicles.

The first CAD images to be released cover the Driving Van Trailer (DVT), Coach B and the early condition restaurant vehicle. All are set to feature turned metal wheels and NEM pockets as well as interior detail, correct period detail and a choice of liveries covering BR InterCity, GNER, LNER and Transport for Wales (TfW).

Above and below: Hornby's all-new Mk 4 DVT CAD drawings for 'OO'.

Following on from the catalogue launch (HM164), Hornby has confirmed it is altering the selection of BR InterCity and GNER liveried Mk 4 carriages to reflect the East Coast train formations in original pre-Mallard refurbishment condition when the Mk 4 catering vehicle was still First Class. As a result, the Mk 4 First Open with accessible toilet in both BR InterCity (Cat No. R40153) and GNER blue (R40164) have been removed from the range and the catering car will appear in First Class guise, redesignated Coach G (R40146/R40193 respectively). An additional BR Mk 4 Open Standard coach will be added in both colour schemes, designated Coach B (R40156C/R40166C). Coach letter designations for other affected vehicles in these liveries will be amended where necessary. LNER liveried Mk 4s remain unchanged, as they are in post-Mallard condition.

Above: Mk 4 Coach B CAD drawing from Hornby.