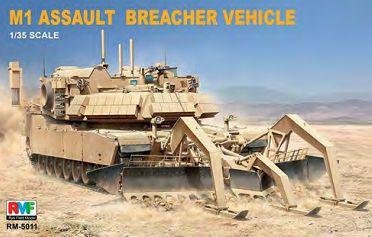 RESEMBLING THE unholy offspring of a camel spider and a tank, the M1 Assault Breacher is a US Marine Corps armoured mine/explosives clearance vehicle. Rye Field Model is the first to release a kit of this unusual machine (commonly known as the ‘Shredder’), and its 1/35 offering (RM-5011) combines the hull of its excellent M1 Abrams, with an all-new upper turret and mine plough. The 18 styrene runners fill the large, sturdy box to capacity, and there’s also a comprehensive photo-etched brass fret, which supplies engine grilles, antislip pads, and plough trails. As expected from Rye Field, the level of detail is staggering, and with an option to display one or both M58 mineclearing line-charge devices in the firing position, there’s even a representation of the explosive ‘tube’ and launching rocket. All current electronic countermeasures devices are replicated faithfully, and one can choose to mount the ‘clear route’ marker flag dispensers in the stowed or deployed positions. Among the many highlights, the standout must be the huge plough, with toothed blades and three metal ‘skis’ mounted on armatures. Given the large number of ‘do not glue’ captions in the instructions, it would appear this whole subassembly is fully articulated. There are three schemes, all for unidentified USMC machines; two are clad in overall NATO Green and one in Desert Sand. More details are at: www.ryefield-model.com and www.tigerhobbies.co.uk