Many modellers were ecstatic when Revell announced an all-new 1/48 SR-71A. The kit is finally available and here we take a look at some of the contents…

For decades, the only 1/48 SR-71A Blackbird available was Italeri’s example, which was very much a product of its time, sporting raised panel lines and basic detail. So, it was with no small amount of delight that reconnaissance fans greeted the news of Revell’s completely fresh offering.

It has now finally hit the shelves and is selling like hot cakes by all accounts. Key Model World received a sample and we thought it a good idea to show you some of the parts. The styrene is in Revell’s usual pale blue-grey shade, and the overall level of detail is impressive… and so is the full size, as the finished model measures 68.2 x 35.3cm. 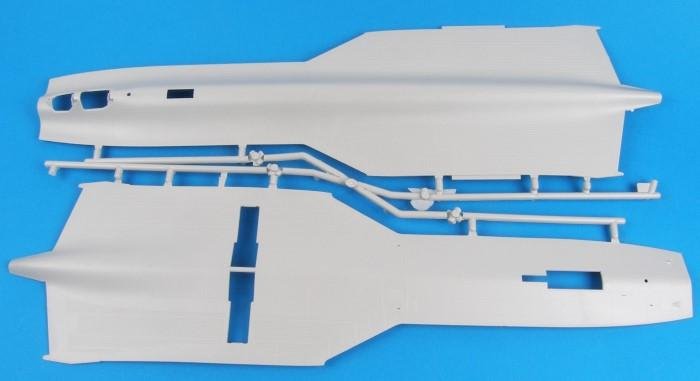 Above: Revell’s horizontally split fuselage halves exhibit very fine panel line engraving, and the type’s trademark corrugated skin sections are well replicated in an indented manner. The runner attachments are very thick, though, and it’s advisable to use a fine razor saw for this process. 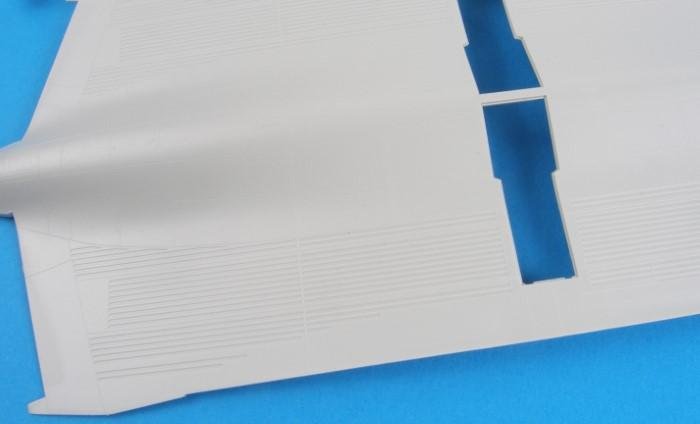 Above: The corrugated skin portions up close. On the real aircraft, these would expand at high speed. 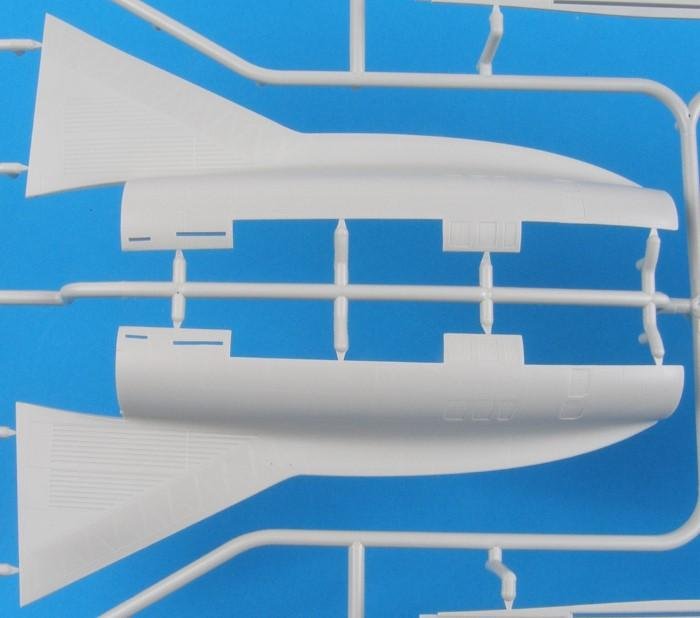 Above and below: Engine nacelles and the outer wing sections are moulded as one via these separate halves. Note the bleed air grilles with recessed mesh being replicated.

Above: Structural rigidity is ensured by this long ‘spine’ part, which marries with three bulkheads before being attached to the lower fuselage half. 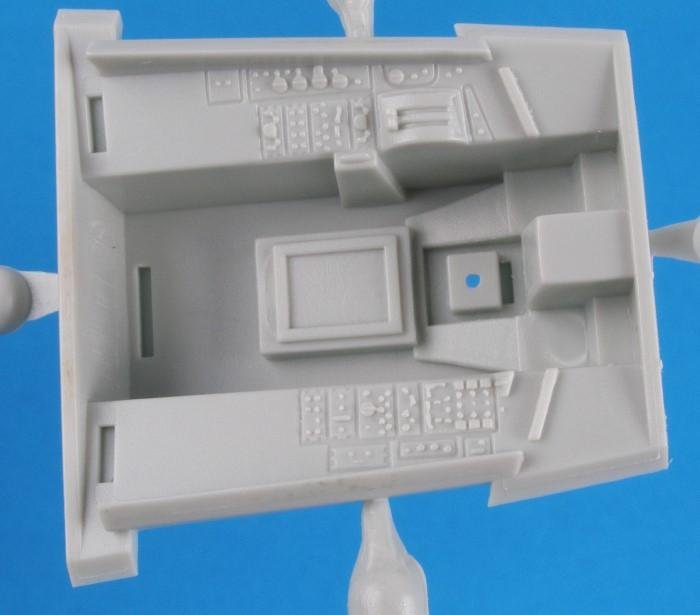 Above: The front cockpit tub with raised and recessed detail on the side consoles. The throttle quadrant is present but is shallower than the real item. On checking references, the switches run all the way back to the bulkhead in the real cockpit 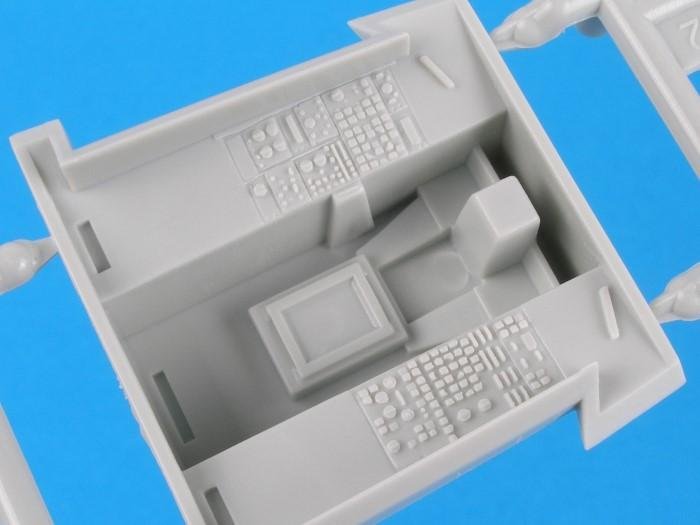 Above: Busy side consoles are also a feature of the rear cockpit tub. 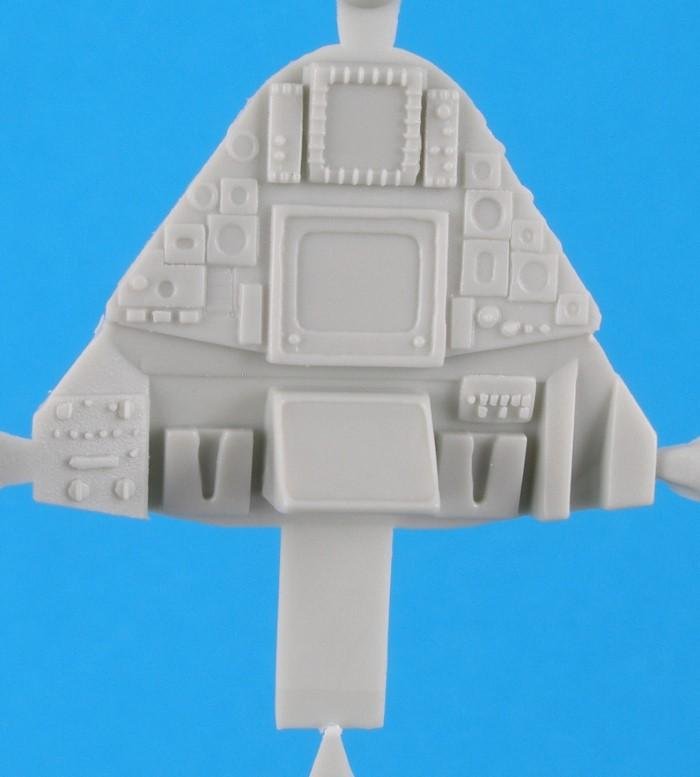 Above: Large screens dominate the reconnaissance officer’s instrument panel, but the execution of the frames, bezels and buttons on our sample wasn’t as neat as you would expect. However, this is accentuated here by a macro lens and will be much less evident to the naked eye and once under paint. There is also the option to remove all the raised features, and employ the highly detailed decals instead. On the real rear panel, the uppermost screen is much deeper. 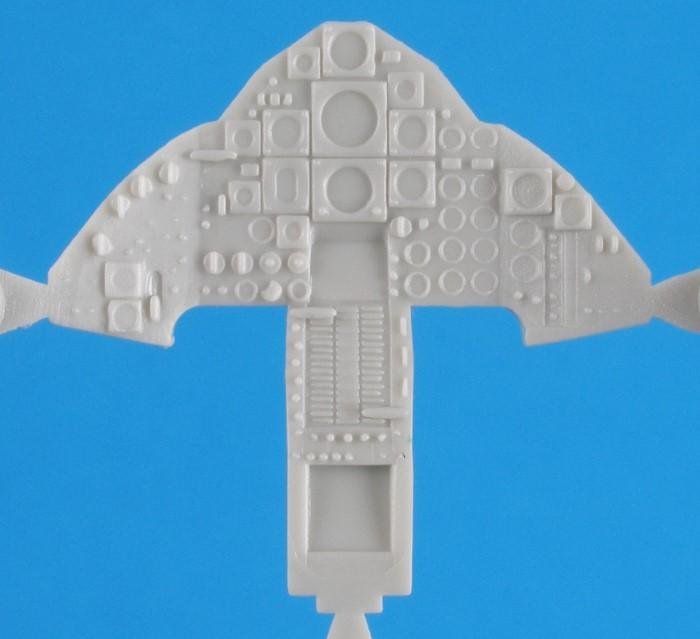 Above: The pilot’s instrument panel, with similar detail of varying quality. 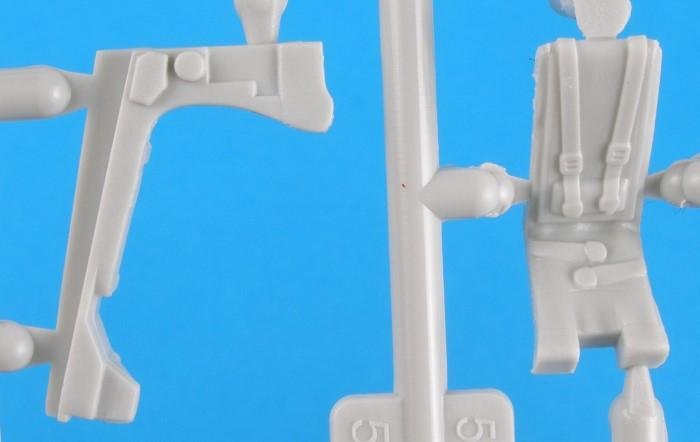 Above: Harnesses are moulded integrally on the F1 ejection seats. We’d be amazed, though, if aftermarket seats didn’t become available very soon, along with more general detail sets in photo-etched metal. Eduard perhaps?

Above: These inserts form the main undercarriage bay roofs. 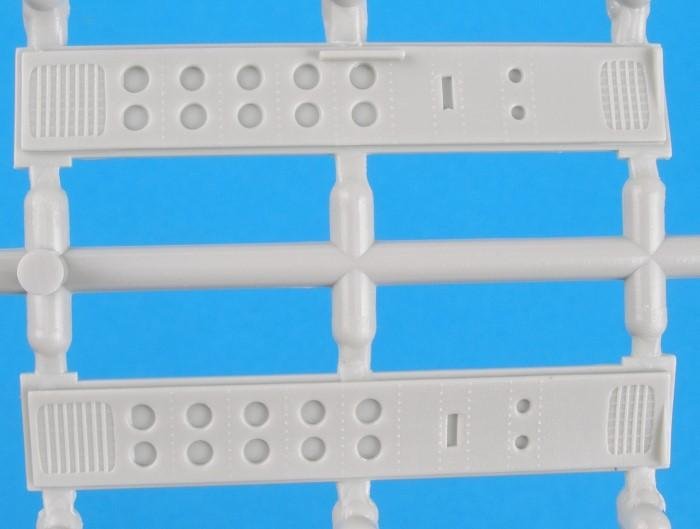 Above: Plenty of detail is present on the nose undercarriage doors. 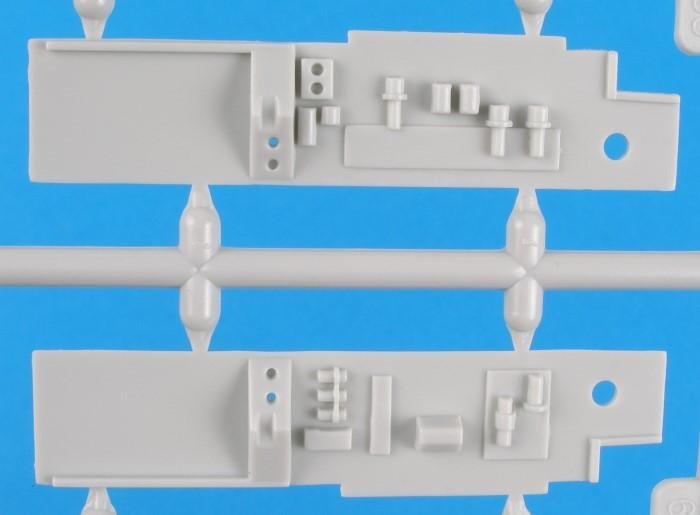 Above: Nose undercarriage bay walls; when combined with the roof part this area becomes much busier. 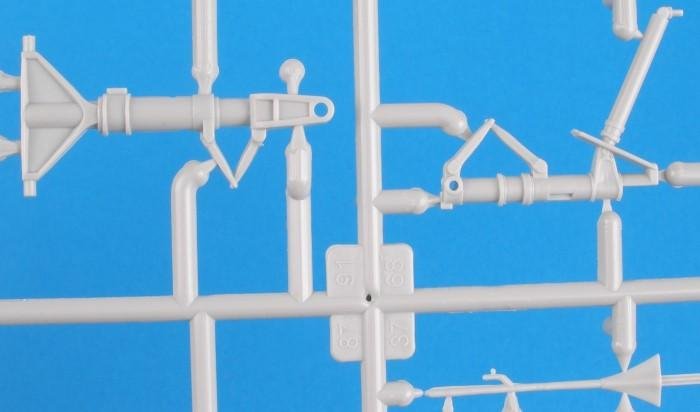 Above: The main gear legs are well detailed but come in halves. One pleasing aspect, though, is the provision of a separate axle piece to secure all three wheels on each leg. 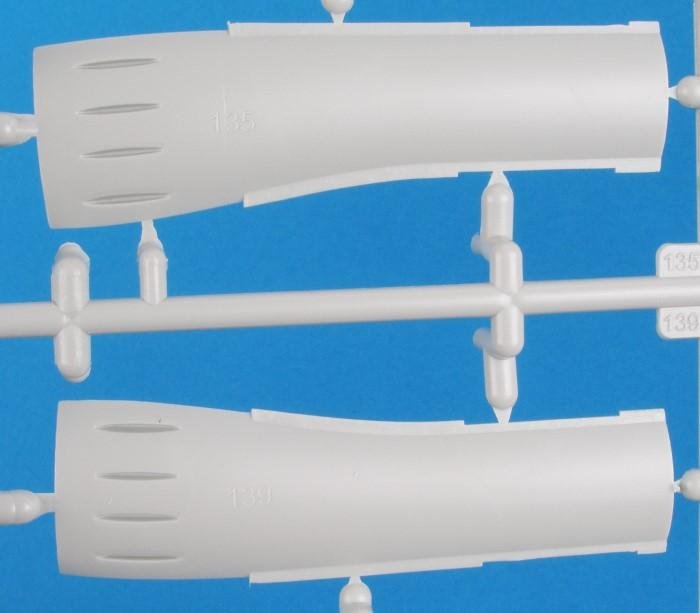 Above: Revell has made a creditable effort at providing air intake trunking, with four of these parts encircling each engine shock cone unit. 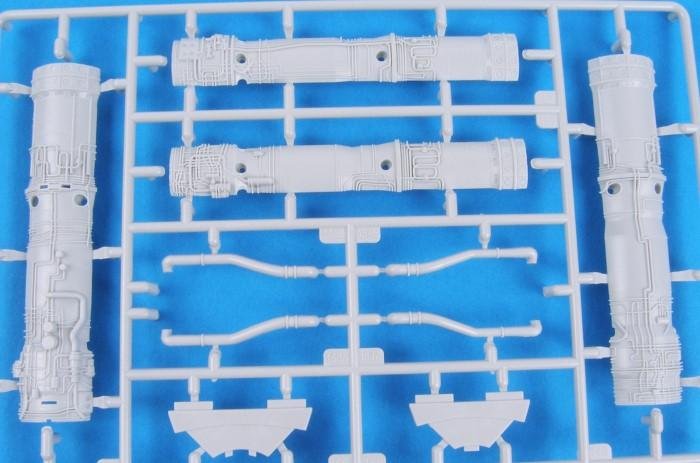 Above: Two complete engines are supplied for mounting on the provided display base. 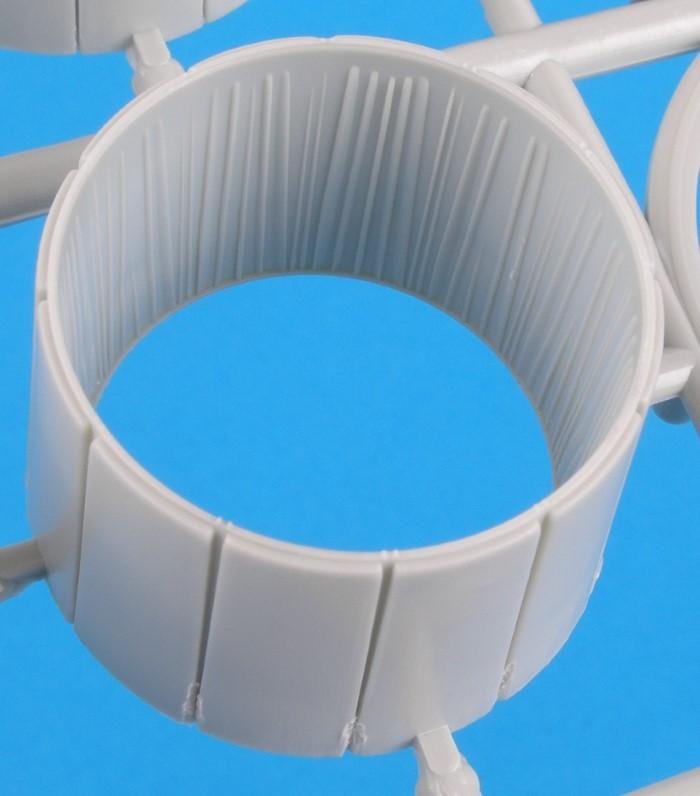 Above: Interior detail adorns the exhaust petal unit but it’s uneven in its execution.

Above: Fan blade arrangements are included in the engine assemblies.

Above: There’s very little distortion on the glazed parts. 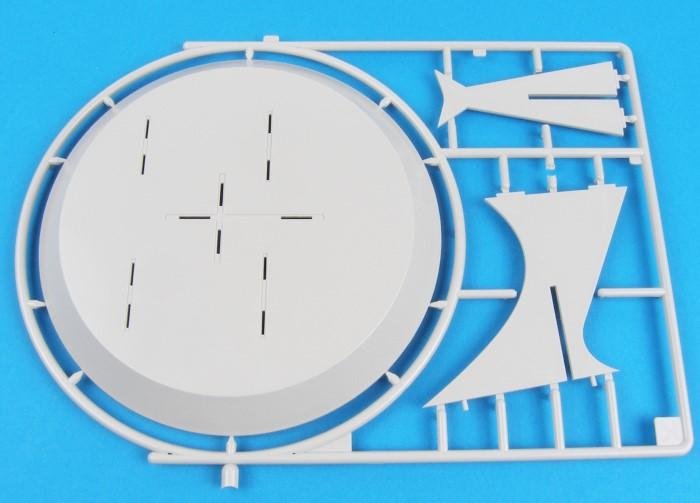 Above: The large display base, which accommodates two whole engines as well as the aircraft itself. 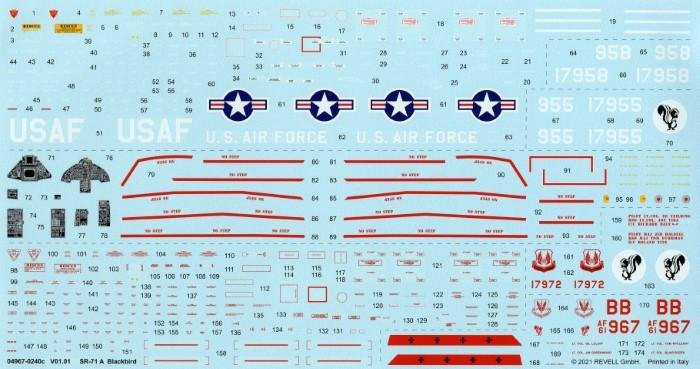 Four colour schemes are supplied but the decals, while being well printed, have matt carrier film so are best overlaid on a very glossy surface to lessen the chance of ‘silvering’. The liveries are:

In general this is an impressive effort from Revell, marred only by the instrument panel, side console and inner exhaust petal detail. However, it will suffice for slightly less-fastidious modellers – although undoubtedly there will be aftermarket replacements now the kit is on the market. The kit (04967) costs £89.99… but it is a lot of model. For further details visit: www.revell.de/en