ON THE SHELF AUTO KITS 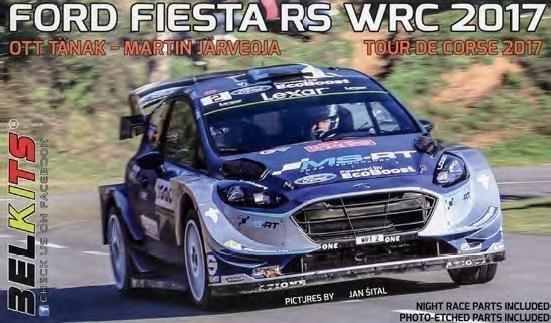 Belgian manufacturer Belkits specialises in rally car offerings, with this version of its Ford Fiesta depicting a machine driven by Ott Tänak with Martin Järveoja in the 2017 World Rally Championship (WRC) season. It comprises the same components as previous releases: six styrene runners and a one-piece bodyshell, plus a photo-etched (PE) fret, self-adhesive chrome sections and a vinyl runner containing five tyres and two mudguards. Moulded components are neat, with distinct items for the front and rear brakes, and fine suspension/steering assemblies, while exterior surfaces feature delicate panel lines. PE components add further refinement, with particularly convincing grilles, buckles, brake pads, and rivetted skid plates included. A large decal sheet provides markings for the vehicle that crashed out early in the 2017 Tour de Corse (Rally of Corsica), although optional parts for nightstage spotlights are inaccurate for this event. 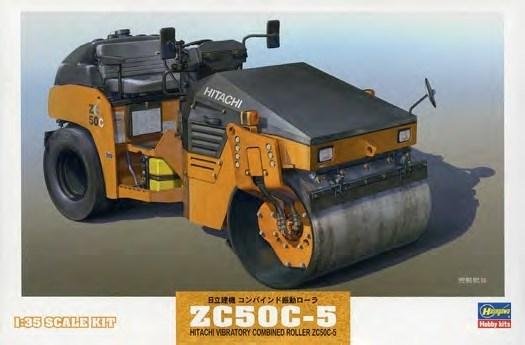 There haven’t been many recent releases from Hasegawa, so its Hitachi ZC50C-5 is a double delight, as it represents a new genre for the firm: 1/35 construction equipment. It comprises nine styrene runners in three different colours, plus a length of vinyl tubing for hydraulic lines. This means the kit could be built without painting, so will appeal to all levels of modelling skill. The moulded detail is to the firm’s exacting standards, notably the seamless roller cylinder and well-defined driver’s controls – the latter are enhanced further by the well-printed decals.

A single eight-piece coverall-clad driver is supplied and the features are convincing, from the steelcapped boots to the safety helmet and hair. There’s a single colour scheme for an overall orange vehicle, although pale turquoise, blue or yellow options would also be applicable. 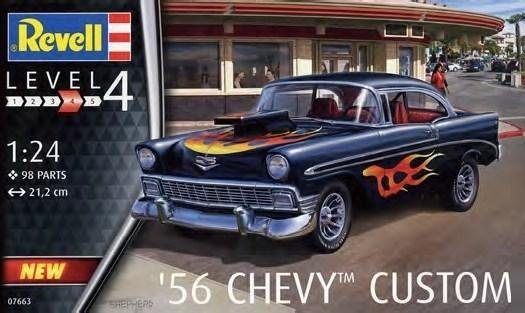 Revell delivers a blast from the past in the form of a re-boxed Monogram 1956 Chevrolet custom car kit, offering new markings to accompany the otherwise unchanged components. The kit is presented on six styrene runners, with a separate seating area and bodyshell plus vinyl tyres. Despite being more than 40 years old, most parts are moulded cleanly, with little in the way of flash or sink marks, although the chrome plates frame would benefit from being stripped and resprayed as the coating is rather thick in places. Either a custom or stock version can be built, with different engine components, suspension and harnesses supplied. The undoubted highlight is the decal sheet, which offers all the necessary trim and artwork, plus seatbelts, tyre logos, dashboard instruments and brand motifs. Colours are well defined, while the opacity appears excellent, and ten different styles of registration plate are included. 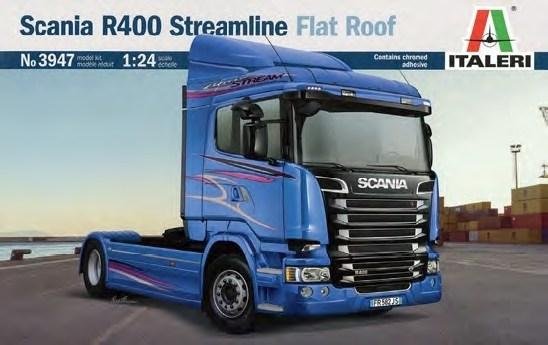 Italeri’s Scania R400 high-forwardcontrol cab truck appears to combine parts from previous releases of R144 and R620 variants. A total of eight runners are supplied alongside seven vinyl tyres and a set of chromeplated self-adhesive stickers. The components capture the vehicle’s appearance faithfully, while a hinge mechanism allows the cab to tilt forward to reveal the engine subassembly. This is a standout feature, with cylinder covers, manifolds, a fanbelt and radiator added to a twopiece block and gearbox to produce a detailed representation of the V8 powerplant. The vehicle can only be configured as left-hand drive, with appropriate European registration plates supplied as decals – UK examples are also included; two French Blue schemes appear to be Scania promotional liveries.