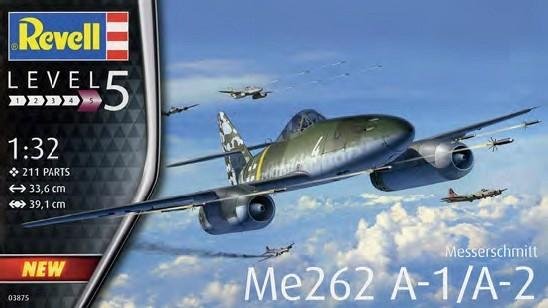 Revell’s 1/32 Me 262 has been re-boxed and allows modellers to build either an A-1a (fighter) or A-2a (bomber) airframe and includes the same 14 runners as the original. Options include bomb racks, raised/lowered undercarriage and leading-edge slats, plus open/ closed canopy and nose weapon bay. Panel lines and rivets are engraved delicately, while tyre treads are replicated neatly. There are comprehensive sub-assemblies for engines and weaponry, and there is a well-appointed cockpit, although minimal flash was noted on several components. Modellers will need to check references for the A-2, as most had the upper cannon removed (not mentioned in the instructions), plus there is considerable debate over its identity, as code 9K+BK has been matched with several airframes. The two schemes are: