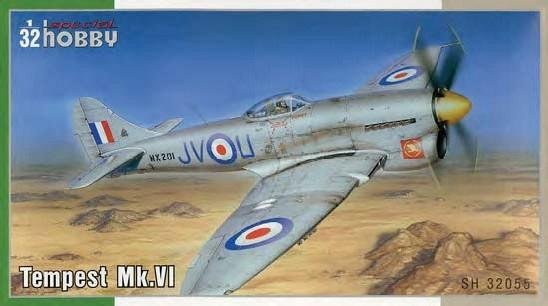 Special Hobby has delighted modellers with its large-scale Tempest Mk.II/V kits, and this release covers the final Mk.VI variant. There’s a blend of runners from previous offerings, including underwing rockets from the Mk.II, plus a new Runner G for the engine/oil cooler intake, spinner and propeller. The moulding is excellent, with fine recessed panel lines and rivets on the exterior, and the horizontally split exhausts benefit from hollow nozzles. The cockpit is the centrepiece, with impressive detail (including separate framework and side consoles), but modellers hoping for open gun bays will need to add aftermarket products. Markings options are: 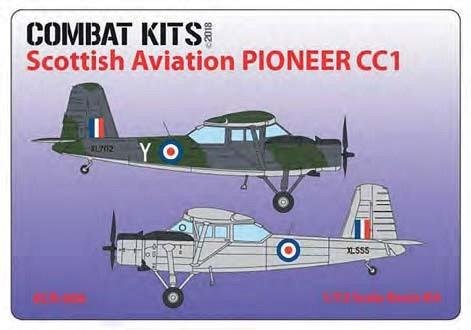 The Pioneer CC.1 has received scant attention from model manufacturers, with just three 1/72 scale offerings, including one from Combat Kits, which is a re-worked Magna Models’ resin/ white metal release. All parts benefit from neatened casting, and the result is finer panel lines and minimal flash when compared with the originals. This is most notable on the clear resin canopy, although the glazing sections will benefit from an additional polish. The decals (by Fantasy Printshop) are excellent, with perfect register and strong colour density, which should prevent underlying tones showing through. This would make for a great introduction into shortrun multi-media kits. Two schemes are provided: 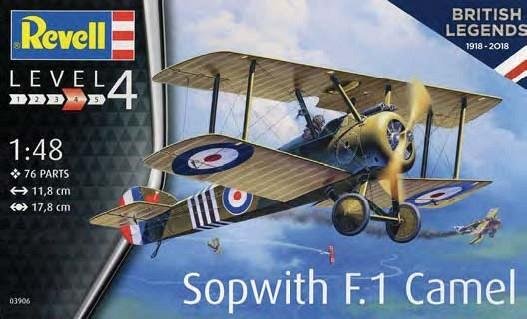 Eduard’s lovely 1/48 Sopwith Camel gets another airing, this time in Revell’s Centenary ‘British Legends’ packaging, with new decals and comparatively hefty price tag. It comprises five styrene runners, including one frame for the clear parts, and all components are moulded crisply, with just the tiniest amounts of flash on the engine pieces. This means there’s a well-detailed cockpit, with integrally moulded framework on the fuselage halves. The engine is a convincing miniature, with separate push rods for the cylinders, and the exterior features are replicated faithfully, with realistic representation of fabric sections. Two diagrams are included for those wanting to rig their model, showing clearly which cables were doubled. Both schemes depict aircraft assigned to the newly formed Royal Air Force: 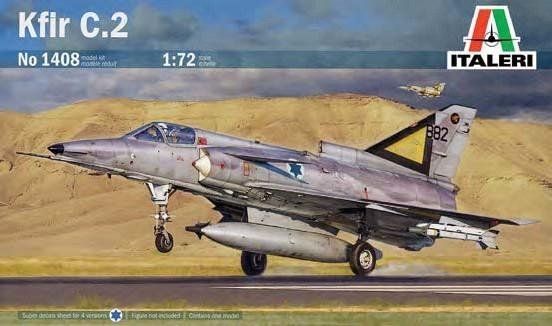 Italeri’s 1/72 Kfir (Lion Cub) may have been surpassed by AMK’s release in terms of overall quality, but is a neat kit nonetheless, with recessed panel lines, basic air-to-air weapons fit and (as is common with its recent releases) a stunning decal sheet. When compared with more modern products, the panel lines are soft, and the undercarriage is rather chunky, but for modellers wanting a budget Kfir, this is an ideal choice. The highlight, though, is the decal sheet, which offers full airframe stencilling, plus recognition triangles, with everything printed sharply and in perfect register, even the items for the airbrakes. There are four markings options, comprising two grey and a pair of three-tone camouflaged aircraft: 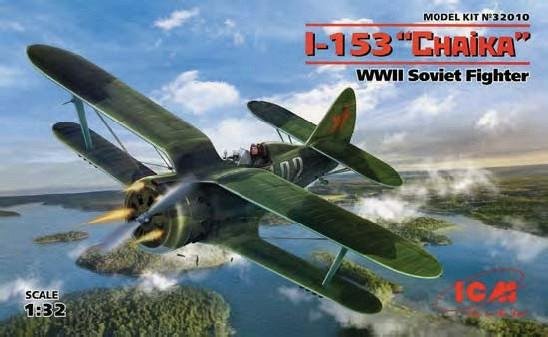 ICM has now produced Polikarpov’s I-153 ‘Chaika’ (seagull) in all three major scales and, like it’s smaller brethren, the 1/32 kit is a gem. Whether it’s the superbly detailed cockpit, or the gorgeous radial engine (with a neat exhaust jig), there’s plenty for modellers to enjoy. The parts are crisply moulded, notably the engine cylinders, which have well-defined cooling vanes. Although known best as a fighter, it was also used in the ground-attack role, and ICM has included two different sizes of bombs, plus eight rockets. There are four schemes: 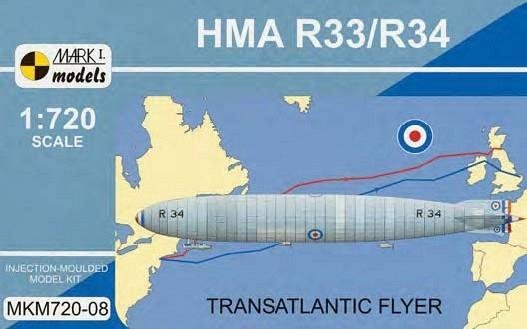 Mark I’s airships are splendid items, and the latest boxing covers the R33 and R34. Differences between the two vessels were minimal, but these are marked clearly in the instructions, enabling modellers to build R33 as it appeared during three periods of its ten-year operational life, or as the first to make a double crossing of the Atlantic in 1919. Parts are provided on a single styrene runner, with the main envelope supplied in halves, to which are added gondola and power-unit subassemblies and the characteristic cruciform rear control surfaces. The markings options are: 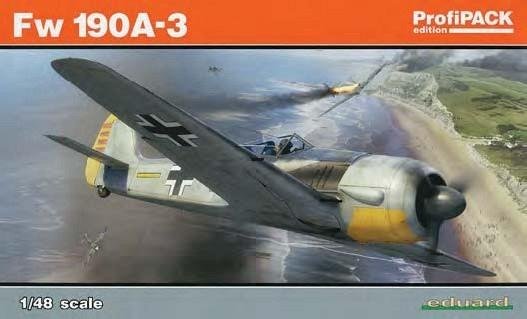 Eduard’s early Fw 190A was previously available in its Royal boxing, but is now offered as a ProfiPACK. The beautifully moulded parts, with fine engraved panel line and rivet detail, are supplied on six styrene runners, four of which are for generic Fw 190 components. These are complemented by a pre-printed photo-etched metal fret, a pre-cut, self-adhesive canopy and wheel mask set and two decal sheets, with one dedicated to airframe stencils. Generously, five markings options are included: 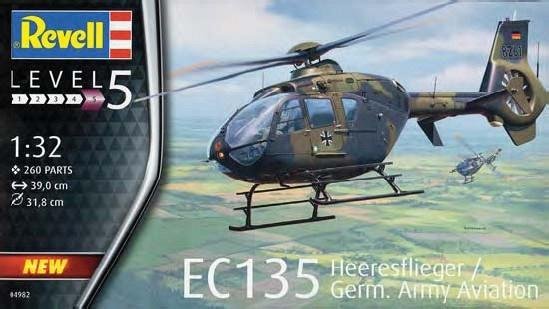 The latest addition to Revell’s largescale collection of EC135s depicts the German military variant and comprises 18 styrene runners, including three frames for the type’s extensive glazing. Most parts are well moulded, notably the main fuselage halves, which are crammed with accurately depicted raised rivet and recessed panel line detail. Several heavy seams were present on AMW’s sample, but these should be easy to remove. A complete interior is provided (although aftermarket items should arguably replace the indistinct seatbelts), plus a main cabin, engine bay and cargo compartment. Instrument panels and centre/roof consoles are supplied as decals, although there is enough moulded detail on the styrene parts for modellers preferring to paint/drybrush these units. The two schemes both depict German Army NATO Green/NATO Black-camouflaged machines, serial numbers 8261 or 8252, assigned to the School of Army Aviation at Buckeburg in 2019. 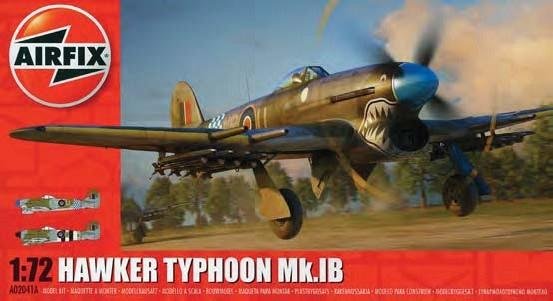 If Airfix’s 1/24 Typhoon (see News, p.6) is too big, then perhaps its smaller-scaled cousin will suit instead. There are five styrene runners, and the moulding is excellent throughout, with combined undercarriage bays and open cockpit floor, plus gun trough interiors with integrally moulded cannon barrels. The airframe is just as impressive, with engraved panel lines and rivets on the exterior, integrally moulded sidewall detail in the cockpit and a choice of bomb or rocket armament for the wing hardpoints. Arguably, the highlight is the decal sheet, with a splendid four-part shark mouth and fuselage stripes for one airframe, and D-Day identification stripes for the second (although modellers may prefer to spray the latter): 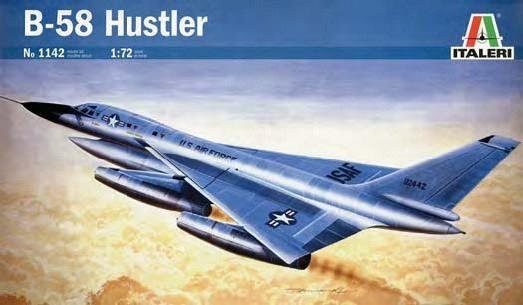 Italeri’s Hustler may be more than 30 years old, but offers a pleasing level of refinement, from the engraved panel lines to convincing representations of the three crew positions, including a choice of open/closed canopies The type’s stalky undercarriage is replicated faithfully, as are the signature under-fuselage weapons/fuel pods, of which two versions are provided, but the kit’s optional B-43 bombs are best replaced. The gorgeously printed decal sheet is the standout item, and features perfect register and strong opacity, with markings for six schemes: 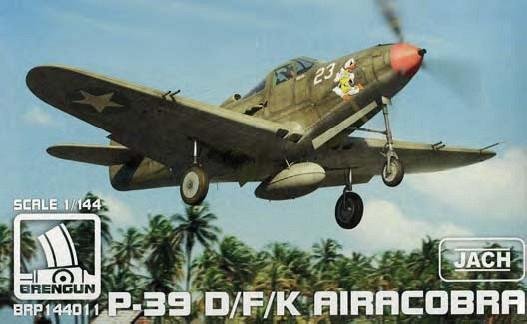 Here’s another diminutive delight from Brengun, with the first in what appears (from the unused components) to be a series of 1/144 P-39s. Parts are supplied on two styrene runners for a single model, plus a separate one-piece canopy. The firm has excelled with the moulded detail, notably the fine recessed panel lines on the exterior surfaces, while there’s a well-appointed four-part cockpit. Most of the finer points, however, will be hidden by the glazing. This is a great starter kit, due to its simplicity and relatively large components, and In typical Brengun fashion, there are multiple markings options, all of which are clad in Olive Drab/ Neutral Gray camouflage: 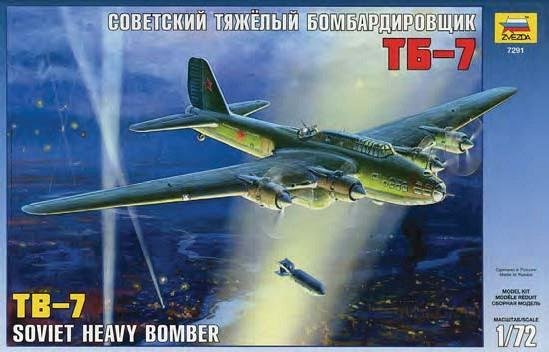 Released initially as an early variant with in-line engines, Zvezda has tweaked the parts for its TB-7 to produce the later, radial powered version. It comprises nine styrene frames, with parts for the different propulsion units contained on a replacement Runner J. There is a surprisingly well-detailed interior, which complements the delicate engraved surface detail perfectly, and multi-part figures for the airframe turrets and underwing barbettes, which also benefit from styrene ammunition feeds. Spars are supplied for the wings and horizontal stabilisers, which should ensure these are aligned correctly, while there’s an option for an open/closed bomb bay, and a FAB 5000 bomb is provided for the former. Markings are provided for a single airframe, clad in three-tone upper camouflage and black undersides: