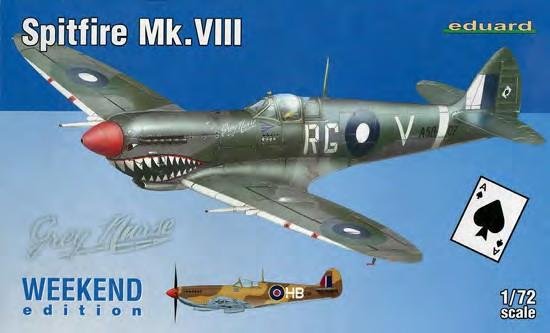 When it comes to late-model Merlin Spitfires, Eduard’s 1/72 offerings are hard to beat. Its first Mk.VIII is a Weekend edition, with six styrene runners packed with well-moulded parts. Five frames are generic items for the interior, wheel wells, glazing and control surfaces, with Runner F bespoke to this variant. Panels are rendered via engraved panel lines, and there are even delicate depressions to represent surface rivets, with raised cowling fasteners as on the real aircraft. Similar refinements feature in the cockpit, which builds into a splendid miniature straight from the box, and includes detailed sidewalls and instrument panel. The two schemes offer markedly different liveries, with South-East Asia Command and North African camouflage: 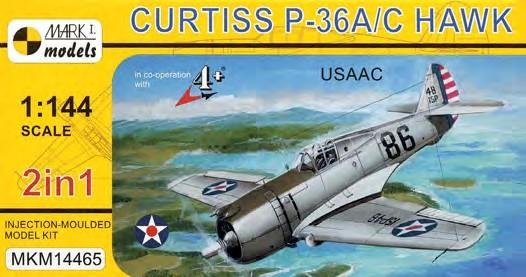 Mark I’s newly tooled P-36 is an absolute gem, and the inclusion of sufficient parts for two models on the four runners (two for each) makes this great value. One gets a well-appointed four-part cockpit, a pleasing 14-cylinder engine and choice of exhaust styles. Note all four wing gun barrels will need removing for P-36As, and just the outboard weapons for the P-36C…the inner guns are supplied with accurate external ammunition containers. As always, the decals are highquality items, with excellent register and strong opacity. Four US Army Air Corps airframes are offered: 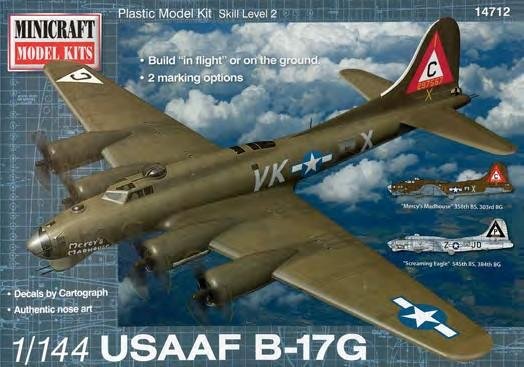 This is another Minicraft re-boxing of Crown’s 1975 B-17G, with new decals. Interior detail is non-existent, with most of the fuselage glazing represented by decals (other than the turrets, windscreen and nose ‘greenhouse’), and surface panels are rendered as fine raised lines. Minicraft has included engine face decals to improve their otherwise bland appearance, and while gun barrels are included, they would benefit from replacement with fine rod. This is an ideal kit for beginners and those new to the scale, given its simplicity and low parts count. Two decal options are supplied, one for overall natural metal, the second being an Olive Drab/Neutral Gray machine: 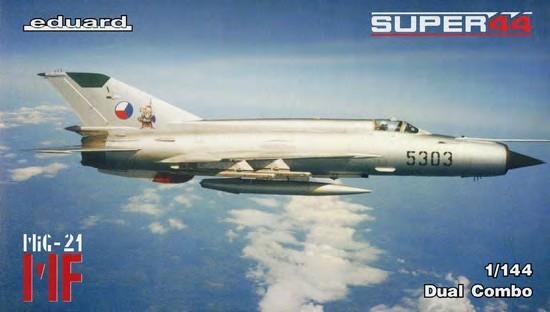 Eduard seems to be cornering the market for second- and thirdgeneration MiG-21s, and its 1/144 scale offerings are no exception. This double-kit boxing comprises six styrene runners, a superb decal sheet and self-adhesive canopy masks. Small it may be, but there’s no scrimping on detail, from the fine engraved panel lines, to the choice of underwing drop tanks, missiles or rockets. There are eight schemes: 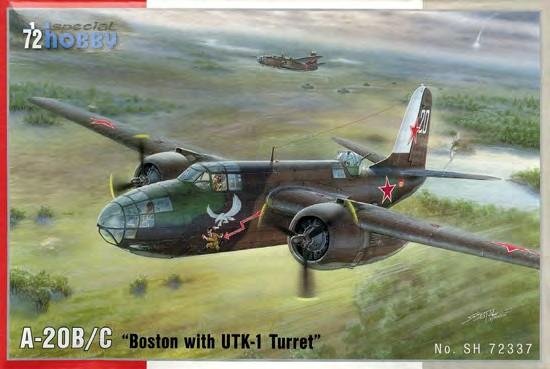 Special Hobby can always be relied upon to cover interesting subjects, and its Red Army Air Force A-20 is a perfect example. Based on the original MPM offering, there are clear directions on how to modify the fuselage to accept the bespoke UTK-1 turret (fitted here with a single ShKAS machine gun) installed on some Soviet machines, but one can still build a standard A-20B/C airframe. Better still, two noses are included, to accurately reflect the differences between the Britishprovided Boston (diagonal glazing) and US-supplied Havoc (stepped glazing), along with side blisters for the former’s machine guns. The two decal options offer contrasting camouflage, either US-style Olive Drab/Neutral Gray or mid-war RAF day bomber (Dark Earth/Dark Green/Sky): 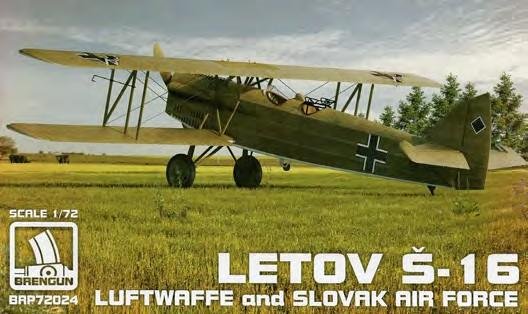 With two busy styrene runners, Brengun’s delightful Letov Š-16 returns, in German and Slovakian guises. With a small photoetched metal fret and acetate windscreens, there’s more than sufficient detail. All parts are moulded cleanly, and the fuselage/ wing surfaces feature delicate scalloping to represent fabriccovered ribs. Minor surgery is needed for the nacelle bottom and lower wing, but otherwise it’s relatively straightforward, and the assembly sequence is logical, with added notes where necessary. The decals are basic, but the colours and register are sharp, with extra items for the upper wing raised aerofoils. More experienced modellers will appreciate the included rigging diagram for the wings. The two khaki/aluminium options cater for a Slovakian bomber and an unidentified German aircraft in 1939. 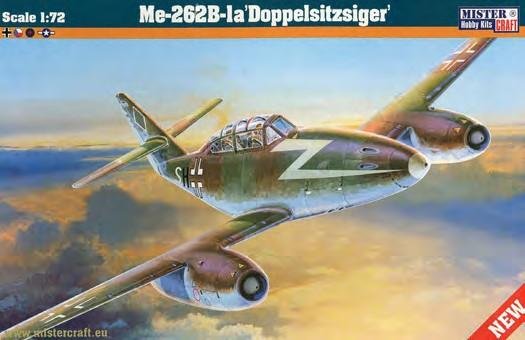 Importer Amerang is home to the Mister Craft brand in dear old Blighty, and this budget range is packed with older tooling. They’re ideal for beginners and those who relish the chance to rejuvenate vintage plastic. This ‘262 is the Heller kit re-boxed with new decals, but the printing quality of the markings does vary. Heller’s 1970s styrene is still reasonable save for the raised panel lines (some are engraved though), and while the markings cater for trainers, night fighter parts are still provided. The overall shape is accurate, including the engine nacelles, although the glazing comes in one piece and is rather thick. The four colour schemes are: 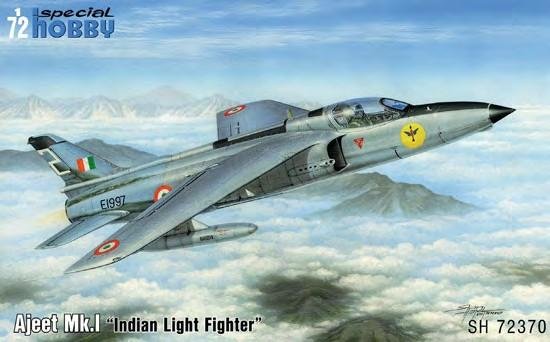 An extension of Special Hobby’s 2015 Gnat F.1 tooling, this kit portrays the Hindustan Aeronautics Limited Ajeet (Hindu: unbeatable/unconquerable) which, amazingly, wasn’t retired from Indian Air Force (IAF) service until 1991. There’s an impressive amount of detail, engraved panel lines and four/five-part alternative seats for the well-appointed cockpit, which has a relief-rendered instrument panel and decals. The exhaust is replicated well, as is the type’s undercarriage, but also pleasing are the stores, comprising two underwing fuel tanks and two types of Soviet rocket pod. Four IAF liveries are provided and these involve colour accents over the standard bare metal: 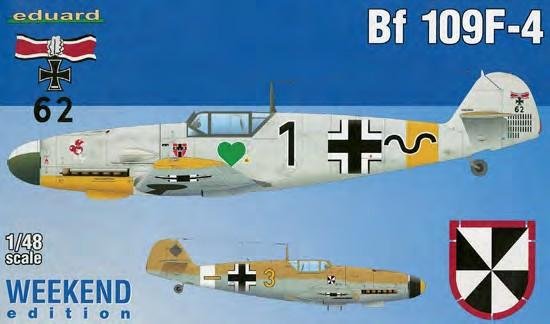 While this Weekend boxing might not have extra whistles and bells, one can still build a very fine replica. The detail on all kits from this mould is superb, and one gets all the small nuances one expects of the ‘F’ sub-type, such as armoured windscreen glass, head armour and the tropical filter for the Mediterranean theatre option. Other plus-points include separate flaps, ailerons, horizontal stabilisers and rudder, and alternative wheel hubs. Cockpit detail is pleasing, with all requisite features being present, and dial decals are given for placement over the detailed instrument panel. Opposite ends of the climactic spectrum are covered by the Luftwaffe schemes, as one airframe wears winter whitewash, the other desert sand: 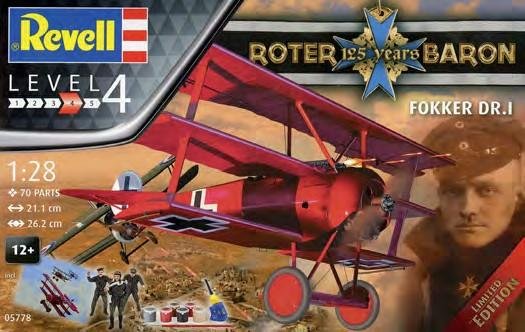 Considering the 1957 vintage, this kit has fared rather well, with just hints of wispy flash. Re-released to mark the 125th anniversary of Richtofen’s death, it’s a product of its time. That said, and despite the odd scale, determined modellers could make it a real showpiece. The engine comes in halves but is reasonably detailed, and the wing moulding accounts for layered linen leading edges, with triangular overlaps. A throttle is moulded on one inner fuselage half, and the cockpit floor receives rudder pedals, a compass, a seat and its support frame. Revell also supplies thread for rigging, along with Contacta cement, a paintbrush, six acrylic colours and an art print of the aircraft. The decals provide for two Richtofen schemes, one being all red, the other mixing said colour with blue undersides and streaked green camouflage: 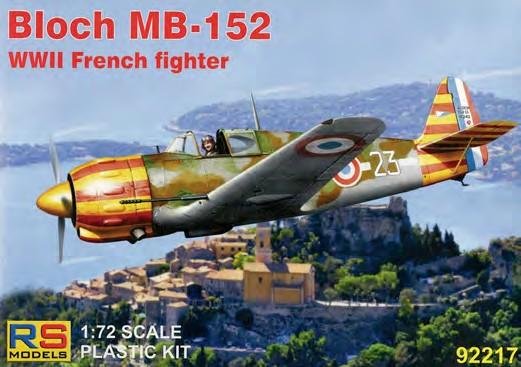 An exquisite resin radial engine is the true jewel in RS Models’ rendition of the Bloch MB.152, which comes with decals for pre- and post-Armistice schemes. The styrene parts are typical of this manufacturer, with fine engraved panel lines, but slightly rough surface texture. Detail-wise it’s a workmanlike affair, as the type’s cowling bulges are well represented, dials are moulded integrally on the instrument panel and centre console; the aircraft’s upper and lower radio masts, and control column, are also in resin. The type’s long wing gun barrels are included, but back to that engine…it will need VERY careful removal from its casting block. One of the four French-based options sports Vichy stripes: 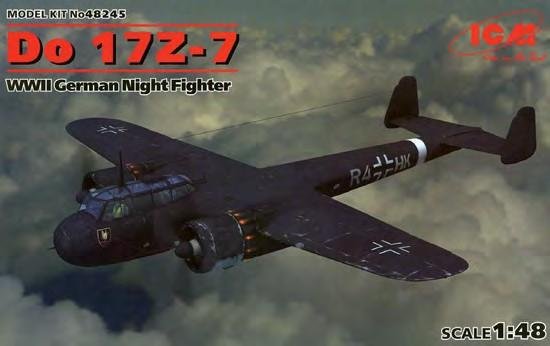 When one sees the wealth of parts and detail in ICM’s quarter-scale Dorniers, they represent excellent value. Shaping up well when compared to scale plans, this kit depicts the first iteration of the Kauz I (screech owl) variant, with its stubby gun nose. The one-piece upper wing negates join seams, while the plentiful cockpit features will look superb under the large and very clear glazing. Both engines are highly detailed radial units, and come with separate cowling parts, and one can also pose the bomb bay doors open or closed. It’s a marvellous kit for the price, which comes with decals for two overall black Gilze-Rijen, Netherlands-based Luftwaffe night fighters: