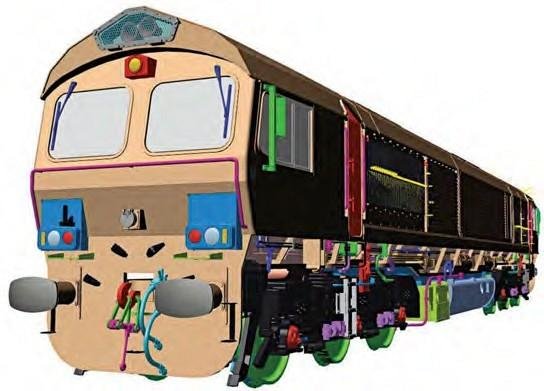 The Class 66 has been announced as a new ready-to-run project by Dapol for release in ‘O’ gauge with the first samples of the in-development model expected in the second quarter of 2020. The announcement was made at the Modern Image O Gauge show on November 2 2019.

The first of the Class 66s were completed in 1998 following construction by EMD in Canada. The initial order was placed by EWS for 250 locomotives, but this has since been expanded with further batches being built for Freightliner, Direct Rail Services and GB Railfreight. The last was built and delivered in Spring 2016 for GBRf - 66779 which was named Evening Star and painted in British Railways lined green to mark the end of Class 66 construction.

The specification includes working front and rear lights - including day and night modes, operating side lights, cab lights, an illuminated original EWS Class 66/0s, Freightliner 66/5s, DRS Class 66/4s and GBRf Class 66/7s. Prices are set at £325 for DCC ready versions, £355 for DCC fitted models and £475 for control panel, two motors plus it will be DCC ready with a 21-pin decoder socket and a brand new sound file with Dapol’s RealDrive functions.

CAD drawing work is approaching completion and the model is due to go into tooling soon. A firm release date is to be announced.