GOING OVER THE TOP 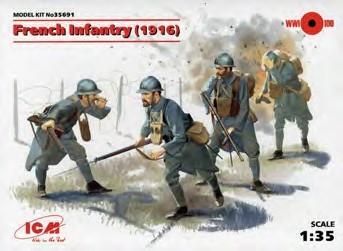 With a well-deserved reputation for convincing and ‘non-standard’ poses, it’s no surprise that ICM’s French Infantry set offers four figures depicted as if they are advancing across No-man’s Land during an attack. It’s also great value, as it’s just slightly more expensive than the separate weapons package (which is also included), and all parts are moulded to the highest standards. Each trooper comprises at least 11 parts, with crisply rendered detail on the overcoats, equipment and packs. Three are depicted advancing at the walk or run, with the fourth urging them on; all appear to be privates or junior Non-Commissioned Officers, and are armed with Lebel rifles and Chauchat machine gun.

Whether it’s for a business jet, helicopter or light aircraft, this three-figure package from PJ Production is great for those modellers wanting crew in the cockpit, and for smaller subjects there are enough for at least two projects. Each comprises a main torso/legs, with separate arms; the sculpting and casting is splendid, notably for the headset/ mic-boom combination, and the seat harnesses are cast integrally, making these simple and highly effective additions.

This delightful snap-together set offers a choice of individual or group vignettes, with five separate bases for the fourman sniper team/observer teams. While these are designed for wargaming, as part of the associated Art of Tactic ‘World War Two’ series, the moulded detail should be more than enough to satisfy most modellers, notably with the rifles and bases, which include both urban and rural settings. The inclusion of tank debris (road wheel and track section) on one is a neat touch and the various sections of damaged walls make for convincing scenes. 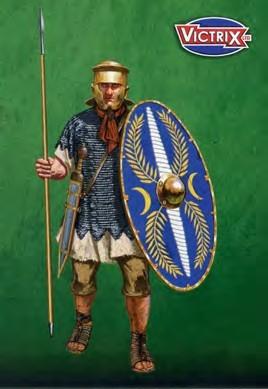 Victrix’s eight-runner figure set supplies sufficient parts to make a Centurion, Signaller, Cornicern (musician) and 21 auxiliaries. All bodies have shouldered arms, and there are multiple alternative options, with Gladius, spears, javelins, shields, torches and even a severed head trophy. Similarly, there are several styles of head dress, including wolf-skin covered for Germanic auxiliaries. This a great set, and the moulded detail is superb, notably on the chain mail and wolf-skins, while the options provide a huge amount of variation. 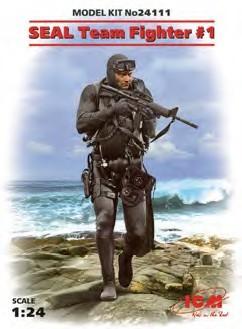 This is the first in a series of 1/24 SEAL (Sea, Air and Land) Team figures from ICM, and depicts an M4-armed individual emerging from the sea having removed his flippers and breathing apparatus. There are 33 styrene and two vinyl parts, presented on four runners, and all feature sharply delineated detail, notably on the personal weapons and face, while the pose is very convincing. The facemask and breathing equipment can also be attached as if the SEAL is still in the water. 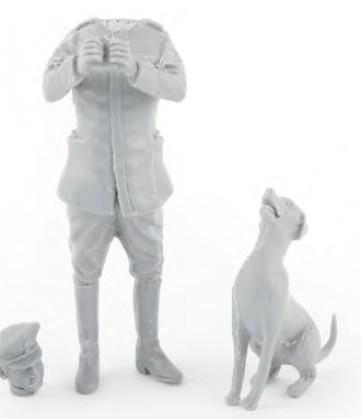 As any dog owner will tell you, as soon as food emerges, they are very attentive, and this scene has been replicated by Kagero to accompany the third volume of its Miniatures magazine. The German flyer is depicted with what appears to be a sandwich, held in both hands and the detail is delightful, from the facial expression to the tunic and trouser creases. However, the canine companion is the highlight, sitting up with mouth parted, longue lolling and (seemingly) tail wagging. Sculpting and casting are both superb, and the dog’s pose is both convincing and instantly recognisable.