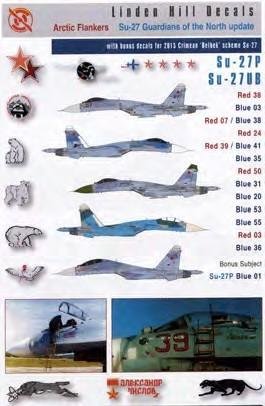 Named ‘Arctic Flankers - Su-27 Guardians of the North ‘, set LHD48040 is a new version of a 2004 product, but certain decals have been re-worked/re-sized with the much more modern Hobby Boss kit in mind. A total of 16 liveries are provided (across three individual carrier sheets), and all represent Flankers (Su-27P and -UB) operated by Russia’s 941st Fighter Air Regiment, at Kilpyavr Air Base, on the Kola Peninsula.

The unit’s aircraft became known for their adventurous artwork, and Linden Hill has managed to befriend the actual artists, in a bid for true accuracy. The art involves polar bears, walruses, an owl, black panther and wolf, along with Guards badges and mission tallies.

All the necessary Bort numbers are given, and the information provided on colour schemes and structural nuances is impressive…a trait for which this maker has become rightly renowned. 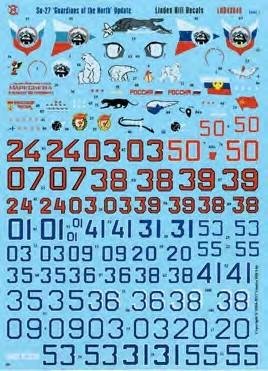