Hornby Magazine's Topley Dale is making progress again with the first steps towards the construction of a new quarry scene. MIKE WILD rounds up the latest additions to the 'OO' gauge test track. 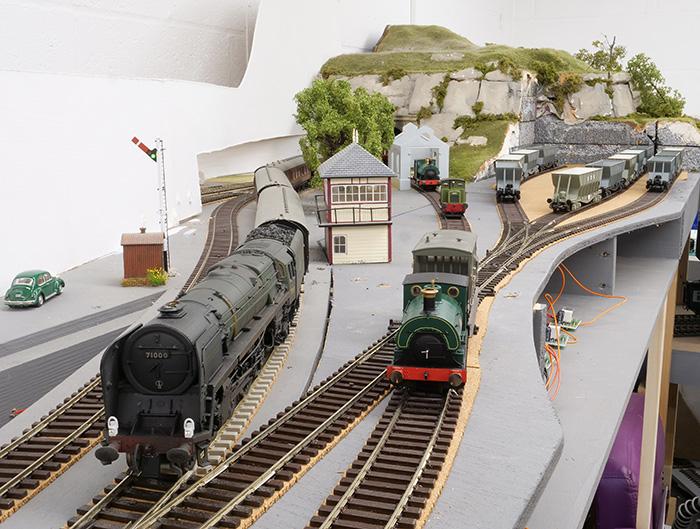 Above: Work has started on the second scenic area of Topley Dale with addition of the trackwork for a new quarry scene.

TOPLEY DALE has jumped back up the job list lately with work starting on the final sections of trackwork separation of the 'diversion route' from the storage yard area. The rear half of the layout has been languishing in a bare track stage for sometime, but following completion of the front half scenic section last year it seemed like high time we moved on with the next phase of its development.

When Topley Dale was expanded from 11ft x 10ft to 16ft x 10ft in 2018 it made space to allow scenery to be added on all four sides. This included the addition of what we call the 'diversion route' in front of the new 10 track storage yard which offers a narrow 1ft deep scenic area where the railway will run on an embankment. 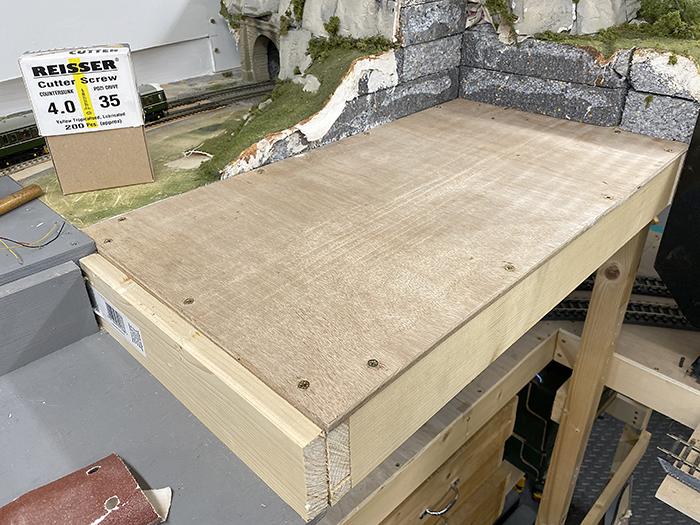 Above: A new baseboard filled the gap between the diversion board and the original layout. It was built using 9mm plywood for the surface and 69mm x 18mm planed softwood for the frame.

Above: Extra supports were added for the new track deck to link the diversion route to new solid top board. 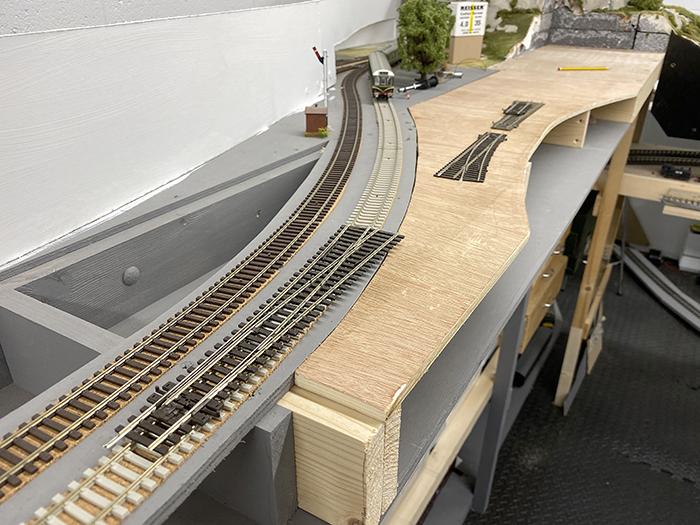 Above: 9mm plywood was cut to shape to match the profile of the diversion route deck. The large radius point will be cut into the main line to provide access to the new sidings. 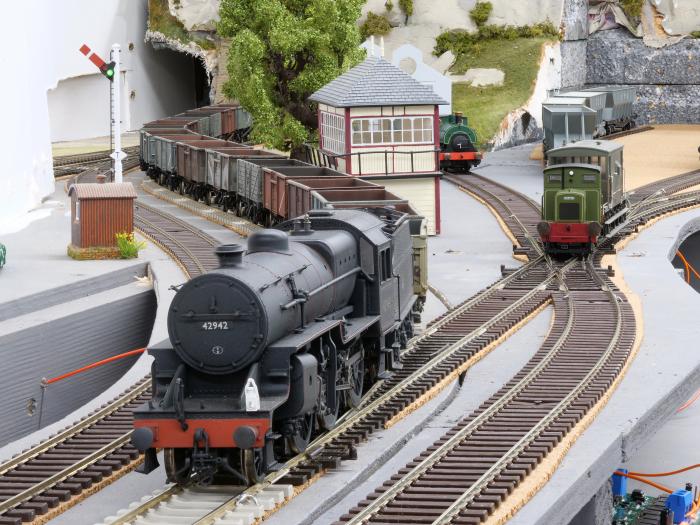 Above: Hughes-Fowler 'Crab' 2-6-0 42942 rounds the reserve curve onto the diversion route with empty 16ton mineral wagons while a 48DS shunts a brake van in the new quarry sidings.

Until recently there was no division between the scenic and storage yard sections, and that is where this months project started. A low six inch tall backscene was added along the full length of the layout, rising at each end to provide a screen from the area that we didn't want to have on display. This is made from standard white faced hardboard, though we gave it an extra coat of white paint afterwards so that the top edges were matching in colour too.

The height of the backscene has been kept low so that we can still access the storage yard behind for stock handling and track cleaning, though all that has to be done from a small step ladder. 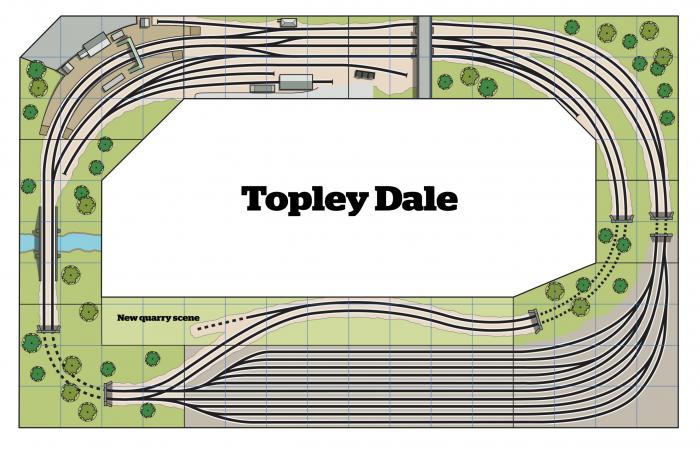 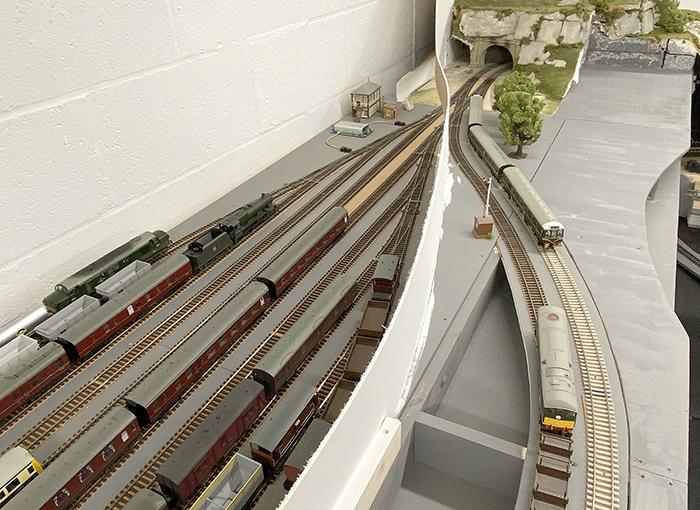 Above: The 10 track storage yard is now hidden behind a low six inch tall backscene. The new boards for the quarry scene have been painted grey to seal the tops.

Having completed the backscene attention then turned to the addition of a small quarry scene. This has been on the drawing board for Topley Dale for a long time and makes use of a redundant area as the 'diversion route' swings back to join the original main line. Its construction required a new 600mm x 340mm baseboard to be built to fill a gap followed by new sections of track deck to support the entrance lines for the yard. Ultimately it will be populated with a Walthers kit for wagon loading, and that will be the next stage of the process.

The track plan for the quarry includes a yard long headshunt, so that industrial locomotives can potter about the yard without having to join the main line, together with a single slip and three way point. The single slip has been used to provide access to the industrial engine shed - the sharp eyed will spot that we are using a classic Dapol/Kitmaster kit for this - and means that industrial engines have to run into the headshunt to gain access.

Above: Track laying started with the large radius point from the main line. A medium left was used temporarily while a single slip arrived in the post. 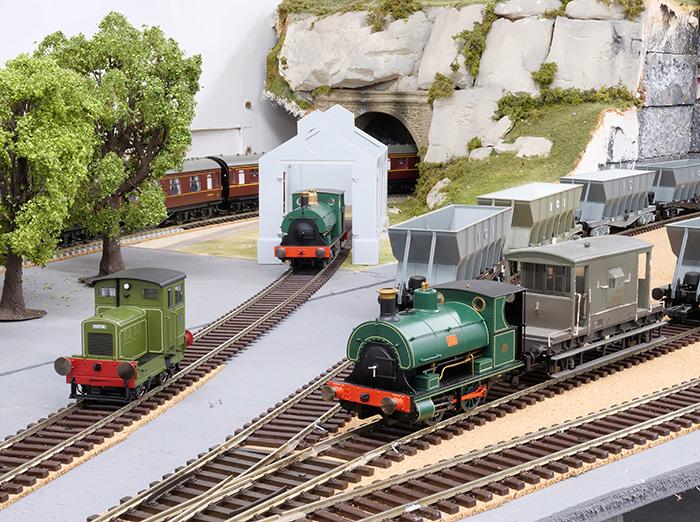 Above: An engine shed is being added to the scene using the Dapol plastic kit. The track work will be amended once the rest of the buildings have been completed.

There are three main sidings in the quarry area which are all temporarily laid until the buildings have been completed. Each one of these is a yard long - much shorter than real quarry sidings - to give the impression of a loading point.

Because of space restrictions the quarry will never be a fully realistic model, but it will present a new scene on Topley Dale which will add to its Peak District theme. Think Great Rocks and you'll have in mind what we are aiming to recreate here. 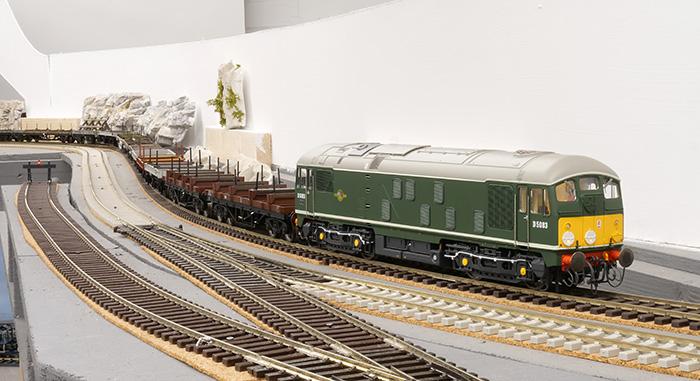 Above: The headshunt provides plenty of space for shunting to take place in the quarry without affecting the main line. A DCC Concepts illuminated bufferstop has been added at the end of the headshunt.

If you would like to see more on Topley Dale's latest developements, check in on our latest Hornby Magazine Layout Update video which is available here on KeyModelWorld now.