YO HO, A PIRATE’S LIFE 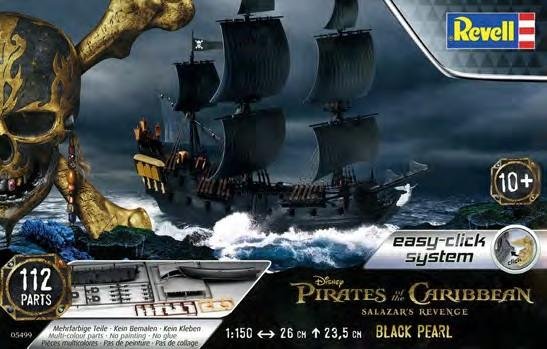 Don’t be fooled by the ‘easy-click system’ label, this is a fantastic ‘Black Pearl’ kit, as depicted in the fifth Pirates of the Caribbean film. It’s perfect for beginners straight from the box, requiring neither paint nor glue to build, yet there is a mass of potential for more serious modellers lacking the space for Revell’s (ex-Zvezda) larger 1/72 offering. There are nine superbly moulded styrene runners (four black, two grey, two gold hue and one brown) and the parts are flashfree and devoid of sink marks. A small set of self-adhesive Jolly Rogers are also supplied. It’s hard to pick a highlight, such is the feast of features, from realistic engraved wood grain, filigree adornments, and superb shrouds (with ratlines and decent deadlines and lanyards). The sails are well rendered, but more experienced modellers may wish to thin their edges slightly, and to add the stay sails between the fore- and mainmasts…otherwise this is a fun project!

LAST OF THE KONGOS

Flyhawk’s own sub-brand Kajika has released another gorgeous 1/700 Imperial Japanese Navy waterline kit, in the form of the battlecruiser Haruna, depicted in its initial 1915 configuration. It comprises six styrene runners, plus separate hull, base plate and metal ballast, upper and lower decks and four superstructure parts, all featuring stunning detail, some of which would be more familiar to 1/350 subjects (notably the life and motor boats). However, the highlights are the deck, with its delicate engraved lines, even including butt joins between planks (instead of just longitudinal lines from bow to stern), the hollow muzzles on the main gun barrels, and the single-piece hollow funnels… the latter are a masterpiece of slide moulding. There isn’t any photo-etched brass, but other than railings, there’s little this medium would add. The single scheme portrays an overall midgrey scheme with a faux boot line, indicated by the underside hull red colour.

Combrig’s resin and photoetched (PE) brass Som/Boevoi (the ship name was changed in 1902) is another stunning kit, with clean mating surfaces for the upper and lower hull halves (allowing either waterline or full-hull models to be built) and sumptuous features throughout. The attention to detail is apparent from the multitude of deck vents, all reproduced as separate items, and there are even individual pressure valve wheels for the torpedo tubes. A modicum of scratch-building is needed for various gun platforms, propeller shafts, yardarms and funnel pipes; combined with the basic kit materials, this is definitely for more experienced maritime modellers. There are no markings or suggested schemes, but in 1901 the vessel would have worn the standard white/green peacetime livery, with tan funnels and black tops and hull cheatline… note the ship’s name was carried on the forecastle sides, and not the hull 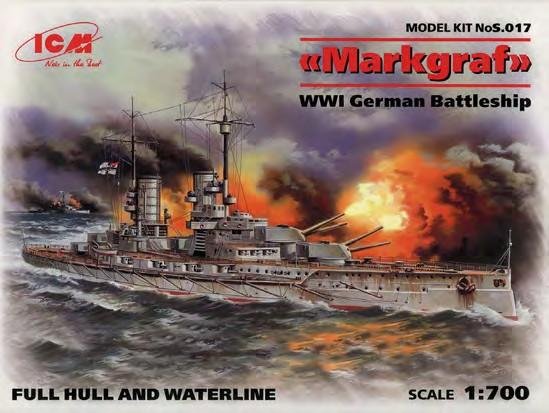 ICM completes its collection of König-class battlecruisers with Markgraf, depicting the vessel in its original form, with upper deck casemate-mounted 8.8cm guns augmenting its main and secondary armament. The parts are common to König, Kronprinz and Große Kurfürst, with a new Runner F for alternative propeller shaft shrouds; all are moulded to the highest standards. With multi-coloured styrene, it could be built without painting, which makes it an ideal entry-level offering for ship builders. Markgraf also represents excellent value, as it offers full-hull and waterline configurations, with a five-piece stand for the former. The paint guide depicts the ship with overall light grey hull and superstructure, and paler grey deck walls; however, Markgraf was probably painted in accordance with Camouflage Paint Scheme No.9. This dictated Squirrel Grey Lfd.No.3 from waterline to freeboard (extending aft of the forecastle on the first superstructure level), with Silver Grey Lfd No.4 (a paler grey hue) above that, with black funnel caps and upper masts