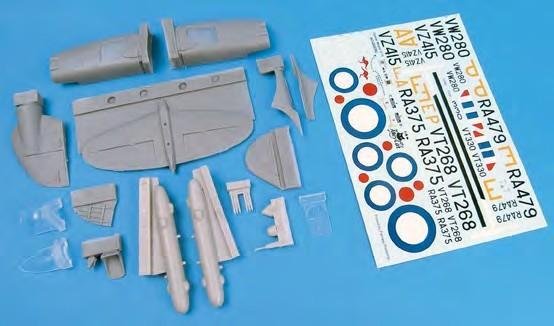 AIRFIX’S 1/48 Meteor F.8 is the recipient of a flurry of conversions from Alley Cat Models, following last year’s U.16/21 product.

Front and centre is a basic 12-piece F.4 set (AC48060C), which supplies all one needs to backdate Airfix’s kit, with a replacement tail fin and horizontal stabilisers, and new forward fuselage. The next step is the U.15 (AC48059), which combines the F.4 package with the aerials, fuselage bumps and wingtip pods and (initially at least) decals from set AC48009C (designed for Classic Airframes’ offering).

Markings for six test aircraft are provided, including three Llanbedrbased Royal Air Force machines, two Royal Navy and one jet stationed at Woomera, in Australia. If that wasn’t enough, there are plans for two-seat conversions, which will include the T.7, followed by the night fighter variants and, to complete the collection, even a PR.10. Further details are available at: www.alleycatmodels.co.uk