Ox towing a Me 163B with two Luftwaffe groundcrew

Here’s an instant diorama, in the form of a beautifully cast resin bullock and two Luftwaffe groundcrew ‘handlers’ supervising the animal as it tows an Me 163B (note the aircraft isn’t included in the set, but is available separately from Special Hobby). All poses are realistic, with one airman leading the animal, and the other walking by its side, with his hand on the bull’s back. Modellers will need to scratch-build the guide ropes, plus either rope or wire cable to the aircraft, but the yoke is supplied. 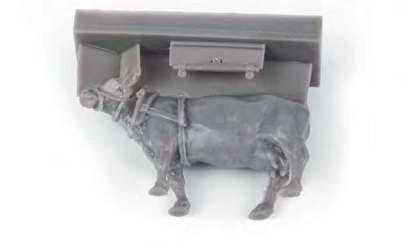 AMERICANS ON THE ATTACK 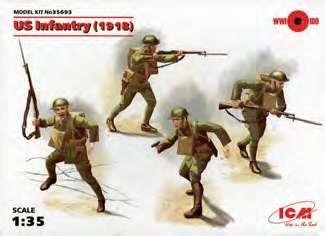 With a reputation for unusual and ‘non-standard’ poses, it’s no surprise that ICM’s US Infantry figures are distinctly ‘not the norm’, with three soldiers and an officer depicted as if conducting a raid/attack. All poses are realistic, although the infantryman portrayed on the box crossing barbed wire does look strange initially, until its realised the rifle is being held to keep it from being entangled. It comprises two styrene runners, with crisply moulded parts for the multi-piece figures and the detail on the tunics and equipment/weapons is first-rate. Clear painting and assembly guides are supplied, along with a very handy listing of the equipment, aiding modellers in distinguishing M1903 Springfields from M1897s. 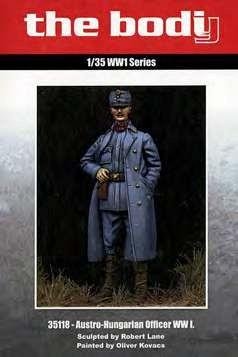 The Bodi is an offshoot of SBS Model and has been producing high-quality figures for some time. This two-piece Austro-Hungarian Officer depicts an individual standing with one hand hooked into the belt, and is characterised by crisp detail, notably on the tunic and boots, and a convincing facial expression on the separate head. The attire is typical for periods of colder weather, with what appears to be a standard issue greatcoat worn over the tunic and trousers; the latter are tucked into the boots.

WAITING FOR THE SIGNAL 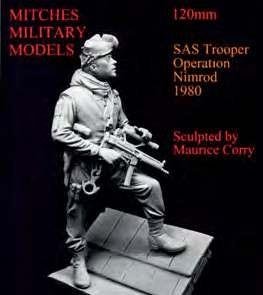 The 1980 Iranian Embassy siege gripped the UK, until its dramatic ending when members of the SAS stormed the residence and freed the hostages. Sculpted by Maurice Corry, this 120mm figure depicts one of the squad members posed on the embassy roof (a section is supplied as a base), just prior to the operation, wearing coveralls and a flak jacket, plus an S6 respirator, which has been lifted to rest on his head. The facial expression is utterly convincing, and the attention to detail extends to the equipment, with loose straps on the respirator, H&K MP5 strap, two flash-bangs, hand-cuffs and hammer on the belt, pistol and holster (plus spare magazines) on the right leg and three MP5 magazines on his left. 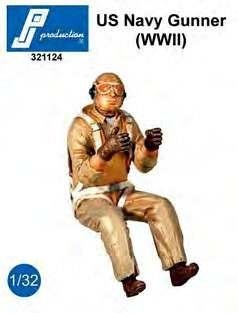 Modellers with 1/32 Dauntless, Avenger, Devastator or other multi-crewed US Navy aircraft will find PJ Production’s fourpiece gunner the perfect addition to the cockpit. The flying coverall and Mae Westequipped figure is posed seated, with the hands raised as if gripping the firing handles of a .30 or .50cal machine gun, and staring intently along the sights. This is a superb piece of sculpting and casting, with a well-defined seat harness and convincing creases on the legs. Similarly, the head is clad in a standard US Navy flying helmet, with goggles. 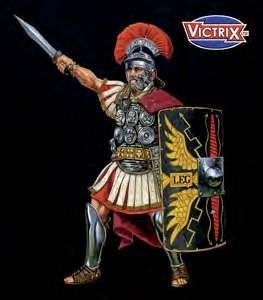 Roman Armies have been a source of fascination for many modellers, and films such as Gladiator have helped, so Victrix’s attacking Legionaries package is perfect for any re-enactments. It contains sufficient parts for 25 Imperial figures, with choices of Gladius (sword) or Pilums (throwing spear) as the main weapons. However, it doesn’t stop there, as Centurions, Aquilifers (Legion standard bearer), Optios (second-in-command), Cornicenes (trumpeters), Signifers (standard bearer) and Legionaries can all be built, along with Praetorians. There are different shields (round, oval, rectangular) flaming torches and even severed heads to adorn the figures, making this great value.