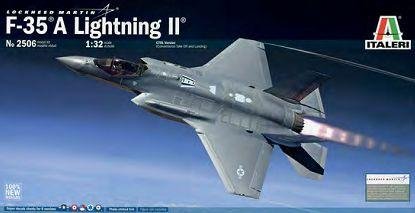 ITALERI’S ANNOUNCEMENT of a 1/32 F-35 Lightning II caught many modellers off guard, and its arrival has since been anticipated eagerly. Its kit (#2506) depicts the conventional take-off and landing A-variant, comprising seven styrene runners, separate upper and lower fuselage halves and a photo-etched brass fret (for cockpit, canopy and JDAM additions). Transparencies are provided in gold/yellow-tinted styrene, which is a neat touch, replicating the radar-reflective coating of the real items. The high-quality mouldings feature engraved panel lines and rivet detail, and while larger interior components have ejector-pin marks, these shouldn’t be too difficult to address.

There is plenty on offer, from the full-length intake/engine assembly that will delight super-detailers, to the well-appointed cockpit and cavernous bomb bays…Italeri is to be commended for its efforts to replicate these complex innards. Display options abound, with choices between open/closed canopy, crew ladder hatch, air refuelling receptacle and weapons bay; a full selection of underwing pylons is provided for non-stealthy munitions carriage.

There are just two minor quibbles, one being the over-scale raised airframe zig-zag panel lines (although sanding may remedy this) and the lack of smaller weapons for external carriage (just two GBU-31 JDAMs and two AIM-9X are included). However, one bonus is a mask set for those raised lines, which should ease painting considerably. Six overall grey schemes cover US, Italian, Australian, Dutch and Israeli Air Force machines. For more details, see: www.hobbyco.net 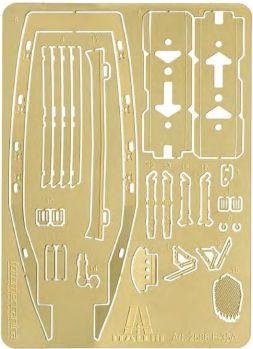