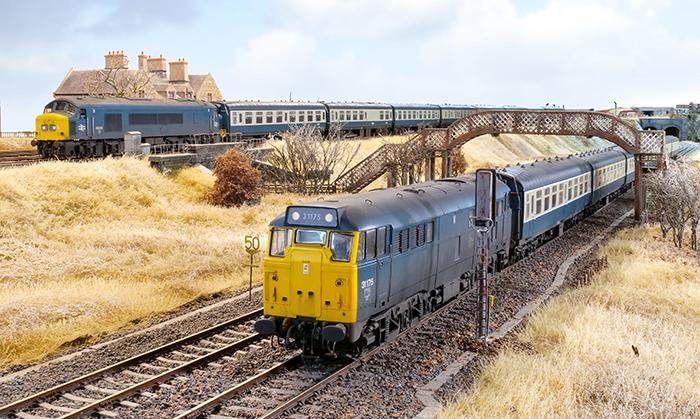 Above: Simon George’s huge ‘O’ gauge model of Heaton Lodge Junction is making its first public outing in December at Wakefield Market Hall in West Yorkshire between December 4 and 19.

Britain’s Biggest Model Railway is making its first public appearance at a fortnight long exhibition in Wakefield this December. Open daily from 10am-4.30pm from December 4-19 it will be the first opportunity to see the huge 180ft long ‘O’ gauge layout away from its workshop.

Built by Simon George, Britain’s Biggest Model Railway is 180ft long and models the four track stretch of the TransPennine route through Heaton Lodge Junction and includes the ‘dive under’ to Huddersfield, River Calder on the Calder Valley line and Heaton Lodge Junction.

The layout is set in winter during the 1980s with frost covered grass and bare trees along the lineside. It is fully signalled and will feature authentic trains, four tracks in operation, realistic sounds from the locomotives and automatic control. In total 30 full length trains have been prepared for the layout which are held in a multi-track storage yard at the rear of the layout.

The venue is Wakefield Market Hall in the West Yorkshire town centre.

It is located next to the bus station and a 10 minute walk from Wakefield Westgate station which is served by trains from Leeds, Doncaster, Huddersfield and beyond.

The entry price is £5 per person with children under 5 admitted free.