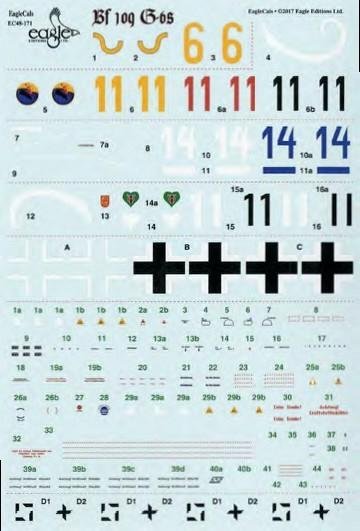 Price: US $18.50 Web: www.eagle-editions.com Printed to complement the recent Eduard and Zvezda Bf 109G-6 kits (but useful for other manufacturers’ toolings, such as Tamiya), this four-strong Gustav selection should please most fans of the type. Three options wear day fighter camouflage, but the anomaly is the white-washed Eastern Front example. As always, EagleCals provides notes on structural nuances, as well as the markings, and the decals are also available in 1/72 and 1/32 scales. The options are: 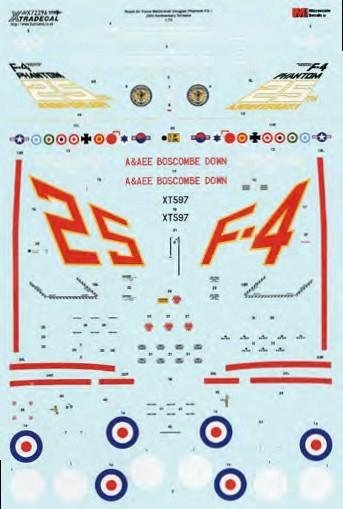 Web: www.hannants.co.uk Here we have liveries for five RAF Phantoms in the older Dark Green/Dark Sea Grey/Light Aircraft Grey camouflage, as part of Hannants’ own-brand series printed with Airfix’s new British F-4 in mind. National insignia is supplied for all aircraft, but one must get stencils via Xtradecal’s separate sheets X72288/289. A mix of standard and later ‘boxed’ RWR tails is represented, along with two Silver Jubilee machines, and the printing is excellent: 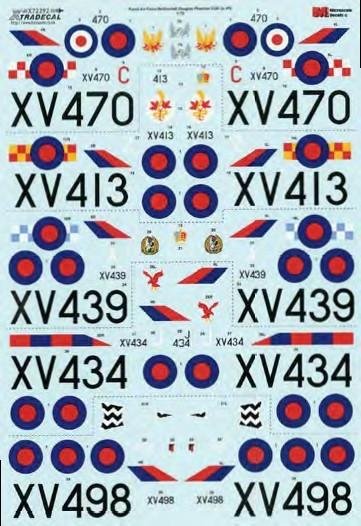 Web: www.hannants.co.uk Until now, the only way to replicate the most dazzling British Phantom, XT597, was via Modeldecal’s old sheet. Here, though, Xtradecal takes the plunge with the eye-popping red/white/blue Phantom of the Aeroplane and Armament Experimental Establishment, which received a special livery (applied by the great Wilf Hardy) to mark 25 years of the F-4 when it attended 1983’s International Air Tattoo, at Greenham Common. All necessary stencilling is provided, as are white backings for the roundels, but the instructions make no mention of the specially shaped doppler radome fitted to this airframe. Luckily, Freightdog Models has produced the unit in resin (see p.112, June issue). 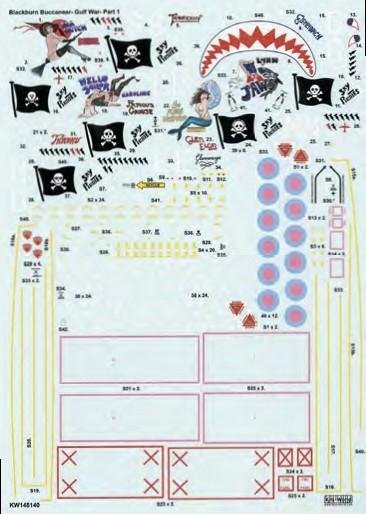 By: Kits World Item no: 148140 Price: £10.20 Web: www.kitsworld.co.uk Sadly, we will not see a re-release of Airfix’s 1/48 Buccaneer due to a damaged mould. For anyone with the kit still in their stash, though, this decal set is worth considering. It offers schemes for six RAF Buccaneers as seen in 1991’s Operation Granby, the British effort in the First Gulf War. All jets carried names and nose art reflecting different brands of Scotch whisky, and there are also the inevitable scantily clad pin-up-style ladies… and a shark mouth. The ‘Sky Pirates’ Jolly Roger flag is also present on each ARTF Desert Pink aircraft. Stencils and national insignia are included, but if this scale is too large, Kits World also offers these markings in 1/72 (172135): 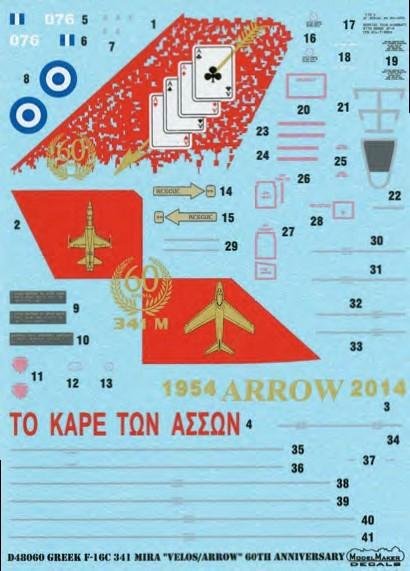 Item no: D48060 Price: €7.50 Web: www.modelmaker.com.pl ModelMaker is forging a fine reputation for special schemes, and this example is a winner for jet modellers. One can replicate a ‘ghost’- camouflaged F-16 from the Hellenic Air Force’s 341 Mira ‘Velos’ (Arrows), but the unit’s usual black and red checkerboard tail stripe is eschewed in favour of attractive artwork to mark the squadron’s 60th anniversary in 2014. The design has the unit’s badge, an arrow piercing ace playing cards, sitting on a red/black pattern on the port tail, while the starboard tail is painted in red and black quarters, with F-86 and F-16 planforms, and 341 Mira 60th anniversary motif in gold. It’s a smart scheme for a Greek Block 50 ‘Viper’, which the company also offers in 1/72 scale (D72060).

Curtiss Hawk 75A in Finnish

Web: www.sbsmodel.com Nordic and Scandinavian camouflage arguably offers extra appeal when it adorns export aircraft, and so it is with the Curtiss Hawk 75A, here in Finnish Air Force colours. SBS Model’s sheet provides markings for four different airframes, two in standard Olive Green and black over RLM 65, and another pair in RLM 71 over ‘65. All wear the associated yellow theatre bands/ panels, but one of the aircraft has a black starboard wing underside. Pleasingly, enough national insignia is supplied to build all four subjects: 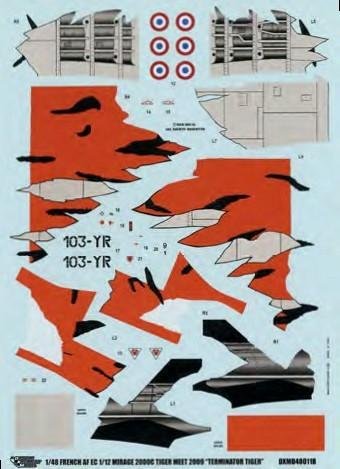 Item no: 71-4230 Price: US $25 Web: www.dxmdecal.com The French Air Force has never been shy and retiring in terms of special schemes, particularly when it comes to the NATO Tiger Meet. This twosheet offering allows one to replicate the stunning 2009 NTM livery applied to the EC 1/12 Mirage 2000C 103-YR. The theme of this décor is that of a tiger, skin peeled away partially to reveal ‘robotic’ undersides. It’s all rendered beautifully but note that the standard Mirage 2000 airdefence camouflage must be applied first, and then the decals are positioned in a set order. DXM recommends Kinetic’s 2000C kit. 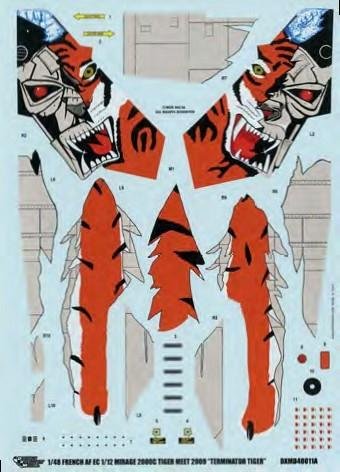 A CHANGE OF UNIFORM 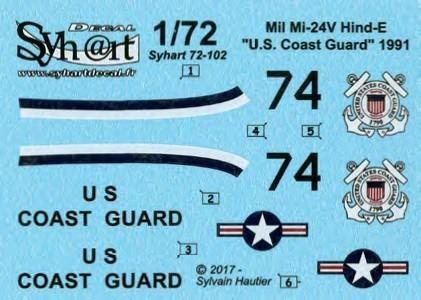 72-102 Price: €6 Web: www.syhartdecal.fr No, your eyes aren’t deceiving you… this is indeed a Hind in US Coast Guard livery! Syhart’s decals allow modellers to portray said helicopter as it appeared in the 1991 Russian movie Charged with Death; a post-glasnost tail of the Russian Navy joining forces with the USCG, to combat drug traffickers. This is a fun option and perfect for anyone who favours building cinema/TV subjects. Much of the colouring is rendered via painting, hence the decal sheet is small, but it is well printed. It offers USCG badges, stars and bars, force legends and two sections of black and white trim. 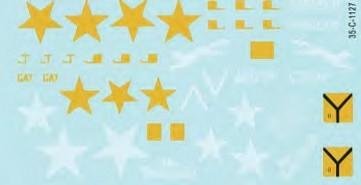 US Tanks and AFVs North Africa

Item no: 35-C 1127 Price: US $8 Web: www.star-decals.net Modellers intent on replicating armoured fighting vehicles in dustier climes should consider Star Decals’ selection for US vehicles. There are schemes for early Shermans, Priests and an M2 half-track used in North Africa, and yellow turret ID panels decorate the M4A1s for an extra splash of colour. One of these vehicles sports two-tone camouflage, and both Priests are of the twocolour variety, for added interest. Plenty of gloss varnish and/or trimming is recommended, as the decals have matt carrier film: 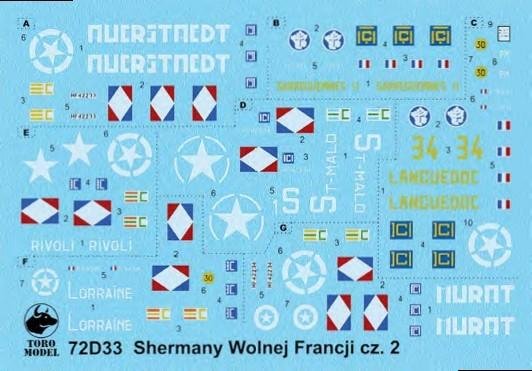 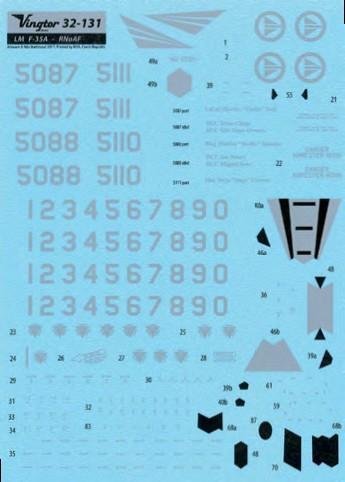 Item no: 32-131 Price: €13 Web: www.vingtor.net Norway is one of the partner nations in the F-35 Lightning II programme, and has had aircraft delivered thus far for training at Luke Air Base in Arizona, USA. Vingtor’s sheet offers serials for the first four airframes, but also plenty of generic numbers with which to portray future deliveries. Stencils are supplied, along with national insignia, pilot/maintainer names and more. The initialdelivery aircraft are 5087, 5088, 5110 and 5111. A different option for anyone with Italeri’s 1/32 kit (see January 2018 issue for a superb full build article 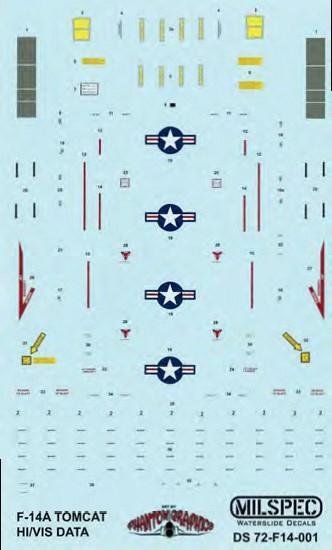 This offering may appear familiar, as it’s a re-worked and updated CAM Decals product with new artwork and data stencils. It supplies sufficient decals for a single airframe (158988/216/NK), including full hi-vis stencil data (also available separately as 72-F14-001), and features one of the more colourful Tomcat schemes as applied to VF-2 ‘Bounty Hunters’ airframes during its second deployment on the USS Enterprise in 1976- 77. This livery (Insignia White undersides with non-specular Light Gull Gray uppers) included the unit’s ‘Langley Stripes’ on the forward fuselage, two stars on the rudders and the squadron insignia (a quartered shield) on the outer vertical fins. Register and opacity are excellent, and this will enliven any 1/72 Tomcat.