MORE FOR YOUR SPITFIRE

MORE FOR YOUR SPITFIRE 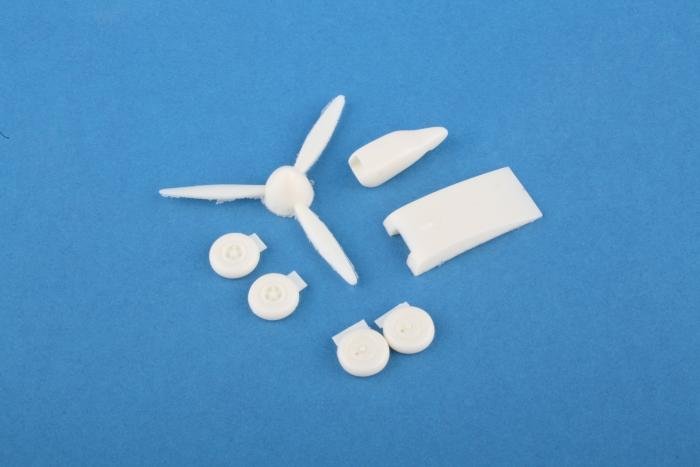 The first two each provide a pair of replacement wheels: AC72058c includes standard open spoke type items, while AC72059c supplies covered-hub versions (note, the latter was fitted to the kit’s Scheme A aircraft) – each of these sets will retail for £4.

A single-piece de Havilland Hydromatic propeller and spinner (AC72060c) has also been released and this is a drop-in item for the kit’s three-part styrene alternative. While the Airfix Mk.Vc does have an auxiliary ‘slipper’ fuel tank, this appears to be the 90 imp gal version, which was usually for ferry flights – Alleycat’s 30 imp gal Slipper Tank (AC72061c) represents the type commonly employed for extended range on combat missions. Last, there’s a single-piece Aboukir filter (AC72062c) as fitted to some deployed Mk.Vc airframes, which replaces the kit’s Vokes-type unit – modellers will need to use the kit’s alternative undernose fairing (Part D22) with this item. The propeller set will cost £3.50 and the slipper tank and filter £2.50 each.

All five will find usage on models of Malta, North Africa and Australia-based RAF and RAAF Mk.Vc aircraft; several of these items can be used on other kits and variants, although modellers will need to check references. Visit: www.alleycatmodels.co.uk