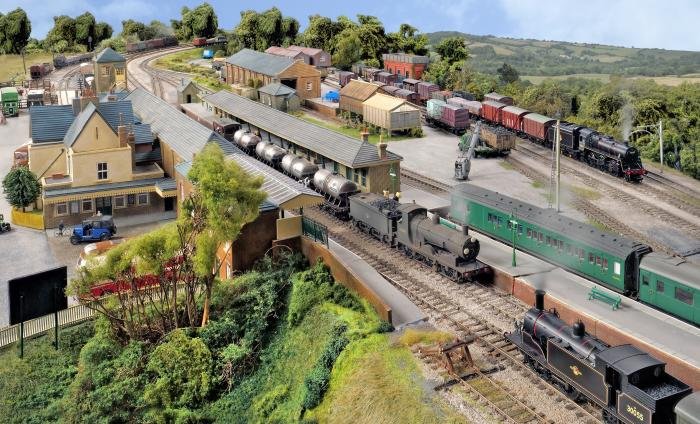 Wimborne is presented by the Wimborne Railway Society and models the Southern Region station from its home town in 'OO' gauge in stunning detail.

The model, owned and operated by Wimborne Railway Society, is ‘OO’ finescale and is currently 20ft long and 12ft wide. Wimborne Railway Society was formed in 1976. Members, including Brian Kohlring and David Cash to name but two, were motivated to measure the station buildings and produce drawings before they were demolished. Others including Alan Thompson took photographs. A model was also started but never completed.

Unfortunately, Wimborne Railway Society was obliged to change premises at short notice and membership has changed. The station buildings were completed but, in order to fit in the space available at the time, they were reduced in length. During the early 1980s the decision was made to rebuild the original boards with new lightweight structures but sadly after some initial activity nearly 20 years of dormancy followed until a new group formed in 2006. It is this group which has completed that vision from way back in 1976.

The layout consists of four ‘L’ shaped corner boards each being 7ft x 4ft, bridge boards 4ft x 2ft plus station and staging boards measuring 6ft x 2ft. The layout is analogue controlled and features main line and branch line workings as well as independent control of the goods yard for shunting purposes. Trains are formed correctly for the 1960s period and the Southern Region area in which Wimborne is based and includes a wide range of ready-to-run locomotives and rolling stock with the majority weathered and detailed to enhance and personalise their appearance.