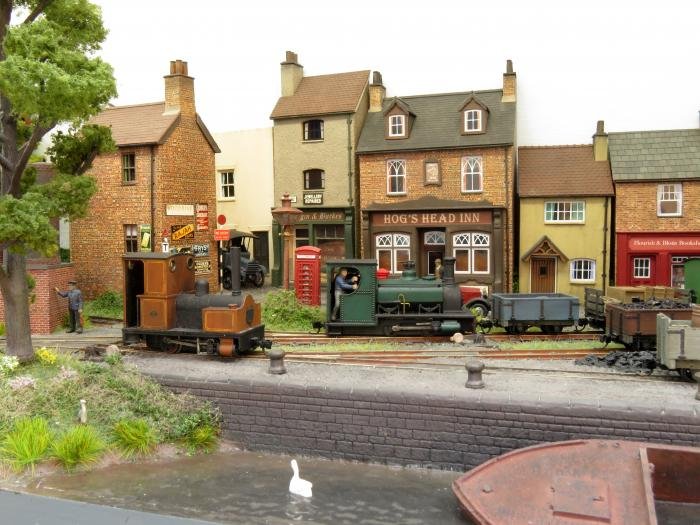 On the banks of a lazy river sits Loctern Quay, where a narrow gauge railway can be found threading through the streets of the village. Although the quayside has fallen into disuse the railway struggles on, its little goods trains still serving the community and its small businesses.

This layout was built for a 009 Society Challenge using two small laser-cut baseboards which have had a back-scene, simple LED lighting rig, and fold-down legs added. Many of the buildings forming the village are laser-cut kits by Petite Properties, which are covered with brickpaper or sandpaper for pebble-dash. A few buildings were scratchbuilt using card or Wills sheets. Setting the buildings at different levels with a sloping road adds interest. The cobbled area is DAS clay, embossed while wet using home-made plastic tools.

The track forms a shunting puzzle giving interesting operation despite the small size, and a hidden sector plate allows two trains to run. The trains are mainly kit-built and are shunted according to a random card system which can be quite challenging. Controls are simple for DC operation. The layout won the challenge in magazines including the 009 Society magazine.